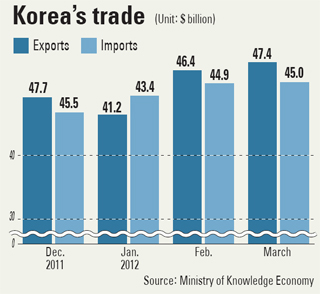 Korea has posted a trade surplus for the second consecutive month after it recorded a deficit for the first time in two years in January, the Ministry of Knowledge Economy said yesterday.

The country’s trade balance stood at $2.33 billion in March even though imports and exports were both down from a year earlier, it said.

The nation struggled last month due in large part to falling ship deliveries. At the same time, demand for imported commodities and capital goods slowed.

Korea’s exports reached $47.36 billion last month, down 1.4 percent from the same period in 2011, but grew 0.7 percent on an average daily basis as there was one less working day this March, the ministry added.

Meanwhile, imports shrank 1.2 percent to $45.03 billion last month from one year earlier to create a bigger trade surplus than the $1.53 billion posted in February, it added.

“The overall trade volume increased from February but fell short of figures from a year ago,” the ministry said in a statement.

In March 2011, Korea experienced a general boom in ship exports while shipments of goods to Japan also surged due to the damage caused by the massive earthquake and tsunami there.

Moreover, Korea’s imports contracted as it purchased fewer commodities such as crude oil and natural gas due to soaring global prices. The country brought in 73.2 million barrels of crude and 4.15 million tons of gas, down from 80.1 million barrels and 4.29 million tons a year earlier.

The ministry said that exports of autos, refined petroleum products and car parts all grew on-year, but those gains were offset by weak demand for ships and mobile communication devices.

Shipments of autos jumped 35.1 percent on-year with numbers for petroleum products going up 7.6 percent. Exports of ships and mobile handsets, however, plunged 27.6 percent and 32.0 percent, respectively.

The ministry, which is in charge of the country’s industrial policies and trade promotion, said exports to the Middle East, Commonwealth of Independent States, or CIS, and the United States did well, although shipments to the European Union and China fell sharply last month from a year earlier.

For the first quarter, Korea, Asia’s fourth-largest economy, exported $134.95 billion and imported $133.33 billion worth of goods to form a trade surplus of $1.62 billion.