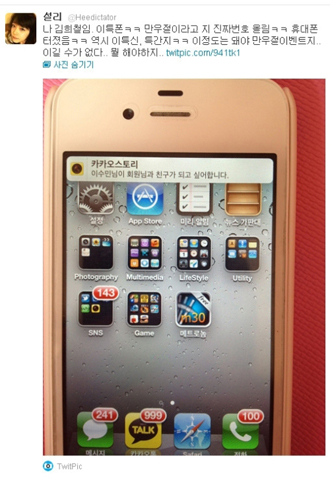 In what might have been just a bit too much for an April Fools’ Day joke, Leeteuk from Super Junior revealed his phone number on Twitter.

“It’s 100 percent real. Don’t be fooled by all the other numbers, and please call to reach superstar Leeteuk here!” he tweeted.

Some fans thought the star’s Twitter was hacked, but SM Entertainment confirmed that, in fact, the star wrote the post himself. The agency added that he now has his phone switched off because of the volume of calls he received.

Fellow band member Kim Hee-chul got in on the fun too, even as he fulfills his military service obligation.

Kim changed his picture on Twitter to one of Sully from the girl band f(x) and went on to message fellow band member Eunhyuk with a friendly note. Eunhyuk fell for the prank only to have Kim post the exchange to his Twitter, generating laughs from fans online.