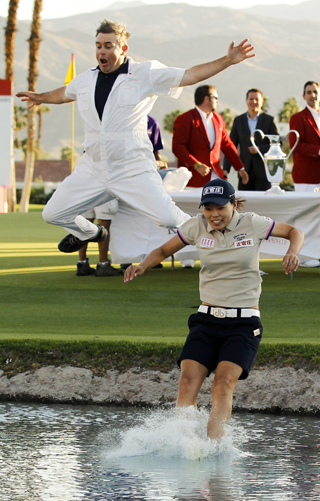 
Just like last year’s U.S. Women’s Open, it was an all-Korean showdown at the first Ladies Professional Golf Association (LPGA) major of the season on Sunday. But only one could take the traditional leap into Poppie’s Pond in the end, with the golfing world reminded just how critical every stroke can be.

Yoo Sun-young won the 2012 Kraft Nabisco Championship at the Mission Hills Country Club in Rancho Mirage, California, with an 18-foot birdie putt on the first playoff hole, beating compatriot Kim In-kyung, who missed a one-foot tap-in putt on the 18th that would have won the tournament.

Both Koreans entered the sudden-death playoff at 9-under 279, but Kim’s epic mistake on the last hole of regulation proved too much to overcome.

It was Yoo’s first major title and her second career LPGA victory since winning the Sybase Match Play Championship in May 2010. She also surpassed $3 million in career earnings with her $300,000 winner’s prize from the major’s $2 million purse.

The 25-year-old from Seoul also became the second Korean to win the Kraft Nabisco Championship, with Park Ji-eun (Grace Park) taking the title in 2004.

Korean ladies have now won 13 LPGA majors, tied for the second most with Sweden behind the United States.

“I don’t think any words can describe how I feel right now,” Yoo told reporters at the golf club. “It feels better than my first LPGA victory.”

Yoo began the final round tied in fourth place and said she was not expecting to win the tournament.

“I thought I had no chance. I thought [Kim] was going to make the putt, but it didn’t happen.”

Kim, who has three wins on the LPGA Tour, was having a bogey-free performance before the par-5 18th. After making just one birdie on the front nine, she began to heat up with a birdie on the par-3 14th.

With Yoo already finished at 9-under after shooting a 69 in the final round and World No. 1 Yani Tseng of Taiwan needing an eagle on the last hole to reach 10-under, the trophy seemed certain to be in Kim’s hands when she reached the green in three strokes.

When Kim placed a long curling birdie putt one foot away from the hole, all she needed was a routine tap-in. 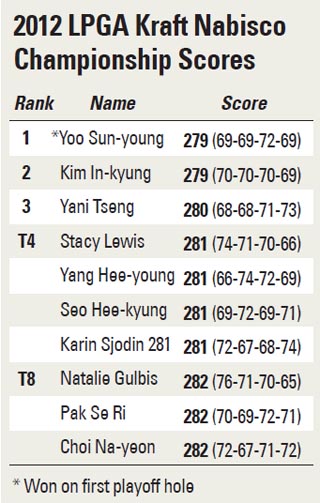 Seconds later, the unthinkable happened as Kim covered her mouth with her left hand in shock, while the Mission Hills crowd gasped. The one-foot putt circled the rim of the cup and popped out.

It was her only bogey in the last round, but the cost was her first major tournament victory.

“I wanted to make the putt with the right speed,” Kim said.

“But coming up to it, I tried to take my time, and you know, the same routine. But I played straight, and actually just broke to the right, even that short putt. So it was unfortunate on the 18th.”

Her miss was also an unexpected result for Yoo, who later admitted that her caddie was even changing her clothes and getting ready to go home when Kim placed the ball one foot away.

“She really doesn’t miss those kinds of putts,” Yoo said. “But some people were telling me that that’s golf.”

Going into the 18th hole again to determine the winner, Kim looked already shaken as her drive barely missed the water and landed in the rough, while Yoo knocked her shot in the fairway. 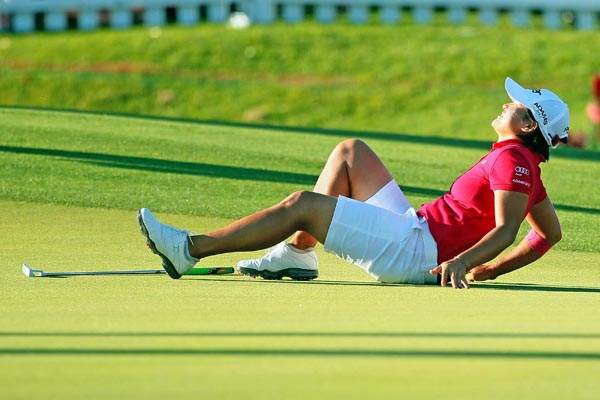 World No. 1 Yani Tseng of Taiwan reacts after missing a putt that would have put her into a three-way playoff on the 18th hole during the final round of the 2012 LPGA Kraft Nabisco Championship golf tournament in Rancho Mirage, California, on Sunday. [AP/YONHAP]

Kim’s third shot landed on the edge of the green about 30 feet away from the cup. She eventually settled for par, but Yoo nailed an 18-foot birdie putt to seal the deal.

The victory was significant for Korean ladies on the Tour as it proved the vulnerability of World No. 1 Tseng, who has won five major titles and began the day as a co-leader with Karin Sjodin.

The 23-year-old has already collected three wins from six tournaments this season and has knocked out Korean ladies in previous tournaments.

Yoo fell short of Tseng last week at the Kia Classic, but revenged the defeat with her major first major title.

Seo Hee-kyung and Yang Hee-young (Amy Yang) tied for fourth at 7-under 281 with defending champion Stacy Lewis of the United States and Karin Sjodin of Sweden.

Seo was at the top of the scoreboard until the 12th hole with a three-stroke lead, but faded with four straight bogeys on the last four holes.

Yoo made her LPGA Tour debut in 2006 and said she is already just one win away from reaching her goal for the 2012 season.

But even after smoothly sinking a birdie putt to claim her first major title and leaping into Poppie’s Pond with her caddie, Yoo said there was one thing she still missed from her moment of glory.

“My mother was with me for a couple of years, but now I’m all by myself in the tour,” she said. “It would have been much better if my family were here.”