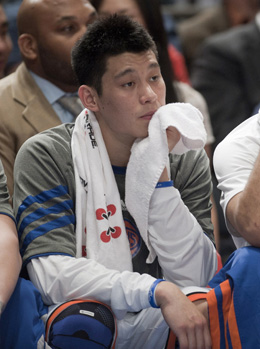 New York Knicks guard Jeremy Lin sits on the bench as they play the Indiana Pacers in this March 16 file photograph. [REUTERS/YONHAP]

Jeremy Lin will miss the rest of the regular season due to knee surgery that will sideline him for six weeks and could leave the Knicks without their star point guard in the playoffs - if they make it that far.

Lin had an MRI exam this week that revealed a small, chronic meniscus tear, and he has elected to have surgery next week in New York.

With the regular season ending April 26, the biggest story in basketball this season is done unless the Knicks make a deep postseason run.

Speaking slowly during a pregame press conference, Lin was unable to hide his disappointment with the decision that was reached earlier Saturday after a painful workout.

“It [stinks] not being able to be out there with the team,’’ he said.

Later, he updated his Facebook page with the message: “Thanks for all the love! [I’ll] return from this surgery stronger and better than before .?.?. and hopefully in time for the playoffs!’’

He was barely holding onto a place in the NBA back in February. Now, after the back-to-back Sports Illustrated covers and popularity around the world, it’s over.

“If this was done very early in the year, obviously .?.?. I don’t know where my career would be. I could be, would be definitely without a job and probably fighting for a summer league spot,’’ Lin said. “But having said that, this happening now hurts just as much because all the players, we really put our hearts and souls into the team and into the season, and to not be there when it really matters most is hard.’’

The Knicks will continue to turn to Baron Davis in place of Lin, the undrafted Harvard alum who became a starter in February and turned in a series of brilliant performances, kicking off a phenomenon that was called Linsanity.

Lin averages 14.1 points and 6.1 assists, but the numbers only tell a small part of the story.

The Knicks were under .500 and looking like a mess when Lin was given a chance to play extended minutes at point guard for then-coach Mike D’Antoni on Feb. 4 against New Jersey.

Lin, the first American-born player of Taiwanese or Chinese descent to play in the NBA, scored 25 points with seven assists in that New York victory, and was inserted into the starting lineup two days later against Utah. He took the Knicks on a seven-game winning streak that gained worldwide attention.

The 23-year-old Lin left the Knicks’ easy victory over Detroit last Saturday after feeling discomfort, saying afterward he could have returned for the fourth quarter if the game had been close. He took part in shootaround before their game Monday and at first believed he could deal with the pain.

Though the swelling went down, the pain never did. He said he got three or four opinions that all said the same thing, and after testing it again on Friday and Saturday, he decided to have the surgery.

“I can’t really do much. Can’t really cut or jump, so it’s pretty clear that I won’t be able to help the team unless I get this fixed right now,’’ Lin said before the Knicks played Cleveland.

“It’s disappointing for me, it’s hard to watch the games and I think I’d want to be out there obviously more than anything right now. But hopefully, it’s a six-week rehab process but I tend to heal fast, so hopefully I can come back as soon as possible and still contribute this season, hopefully.’’

It’s the second serious injury loss of the week for the Knicks, who are in eighth place in the Eastern Conference. Amar’e Stoudemire is out two to four weeks with a back injury, leaving the Knicks without their second- and third-leading scorers for perhaps the remainder of the regular season.

Davis still isn’t 100 percent after a herniated disk in his back kept him out of action until February. The Knicks have Mike Bibby and Toney Douglas as well as rookie Iman Shumpert as point guard options, but no one as good as Lin.

“We’ve got to go on, but he’s a big piece of our puzzle and what we were doing as of late before he actually went out,’’ interim coach Mike Woodson said.

“All’s not bad. Again, we’ve got three veteran point guards sitting over there and the rookie we could play some at the point. We’re just going to have to make do until he’s able to get back into uniform. But it is a big blow.’’

Lin will be a free agent after the season and said he hopes to return to New York, but otherwise wasn’t thinking that far in the future. AP