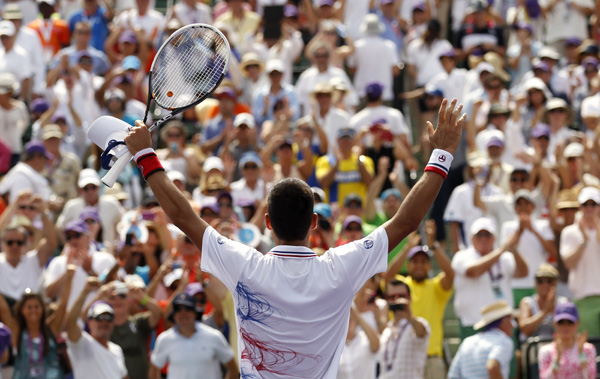 Novak Djokovic of Serbia celebrates his victory over Andy Murray of Britain in the men’s final at the ATP Miami Masters tennis tournament in Florida on Sunday. [REUTERS/YONHAP]

Djokovic, who won in Miami for the first time in 2007, became just the third man to win the title three or more times, along with Andre Agassi and Pete Sampras.

For his third straight match, Djokovic cruised through the first set before finding himself in a tense tussle in the second.

However, even though the second set went with serve until the tie-breaker, it was Murray who was under pressure most, fighting off break points in three of his service games.

“I thought I played a great match from start to end,” said Djokovic, who didn’t drop a set in the tournament.

“There was a couple of service games I had a chance to break him in the second set. He’s such a quality player, you never know.

“That’s why he’s right at the top - he always comes back, even if you feel you have control of the match,” Djokovic said. “I’m really happy to close it out in straight sets.”

Djokovic captured his 30th ATP title and his second this year after his triumph at the Australian Open. It marked his 11th victory in the ATP’s elite Masters 1000 series.

Djokovic said that made this win, which made him the first man since Roger Federer in 2006 to successfully defend the Miami crown, all the sweeter.

“I had a great tournament after that tough loss in the semifinals at Indian Wells,” said Djokovic, adding that he recalled his 2007 triumph in Miami as a springboard to his current success.

Murray, who beat Djokovic in the 2009 Miami final, was playing his first match since Wednesday when he downed Janko Tipsarevic in the quarterfinals. He advanced to the title match on a walkover when world number two Rafael Nadal withdrew before their semifinal with a left knee injury.

Oddly, that was Murray’s second walkover of the tournament, after Canadian Milos Raonic pulled out of their scheduled third-round clash with an ankle injury.

Whether it was the layoff or not, Murray wasn’t at his sharpest, with his 39 unforced errors making things easier for Djokovic.

His only break chance in the entire two-hour, seven-minute encounter came in the fifth game of the first set, but he was unable to convert it and stem Djokovic’s momentum.

The Serb had gained the upper hand in the fourth game of the opening set, which Murray led 40-0 but ended up losing on Djokovic’s second break point.

Djokovic eventually closed out the opening set with his first ace of the match, and Murray promptly found himself in a 0-30 hole in the first game of the second - typical of the pressure he faced throughout the second set.

“Maybe it took a few games to get used to the pace,” Murray said, but added he thought the set was closer than the score reflected. “There were a lot of close games in the first set.” AFP