Cyworld looks to Nate for ideas

Cyworld looks to Nate for ideas 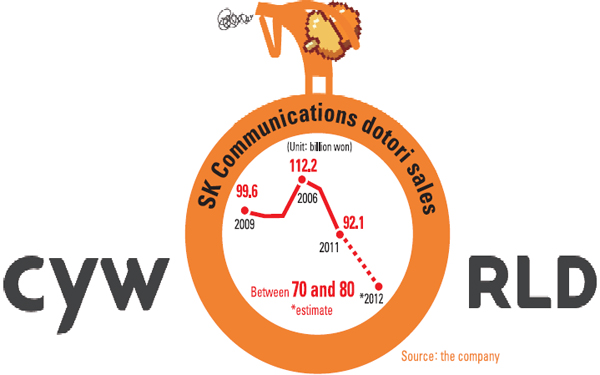 SK Communications, the operator of the popular social networking site Cyworld and Web portal Nate, is fighting to revive the former’s dwindling popularity by changing its business model.

According to the plan, Cyworld will reduce its dependence on its virtual currency dotori, or “acorn” in English, which allows users to decorate their “mini hompys” visually and aurally by purchasing background music, furniture and other appliances.

Now the company plans to benchmark the business model of leading Korean Internet firm NHN, which operates the nation’s No. 1 search engine Naver. NHN generates massive revenue from features and advertising on the search engine.

The decision comes as Korean Internet users have been ditching Cyworld and migrating over to foreign social networking sites such as Facebook and Twitter, causing the company’s dotori-derived revenue to drop significantly.

According to market observers, dotori has been a major cash cow for SK Communications since it introduced the virtual currency in 2001 and many Koreans zealously decorated their homepages to attract more visitors.

In its heyday, dotori served as a popular birthday or anniversary gift, and department stores and retailers used it as a reward to market their products. It was even used to make charitable donations.

SK Communications raised over 112.2 billion won ($98.7 million) from dotori sales alone in 2009, but it estimates it will reap between 70 billion won and 80 billion won this year.

Cyworld is also seeing fewer visitors, with the number dropping from 18 million in December to 16 million in February, compelling the company to seek change.

“We even adopted the marketing strategy of giving free dotori to Cywold users as a special promotion to retain monthly visitors, but this backfired as people stopped visiting after they used up all their dotori,” said an official from the company.

Lee Joo-sik, who was named as SK Communications’ CEO in January, is spearheading the reform drive to diversify Cyworld’s revenue sources.

He recently held a town hall-style meeting with all the company’s employees to come up with innovative ways of reviving the struggling business.

“We will increase the competitiveness of Nate by fully utilizing our core platforms - Cyworld and Nate On messenger - and we will catch up with competitors like Naver,” Lee said in a recent meeting with corporate executives.

To improve efficiency, Lee decided to allow team managers to make and act on decisions rather than await authorization from executives, as was the case before.

He also ordered employees to refrain from releasing “half-baked products” like its smartphone camera application Cymera. The company delayed putting Cymera in app stores after it took flak for not offering a high enough level of service. It was eventually released on March 22 after improvements were made.

SK Communications said the app was downloaded more than 130,000 times in the first five days of its release.

“Our survival lies in restoring the competitiveness of [Nate], which is not even one-tenth as popular as Naver,” said an SK Communications official.

“When we stop making dual investments in services and focus on our core competences, we will be able to restore the glory that Cyworld and dotori achieved in the past.”