For local animations, EU FTA may be gateway to world

For local animations, EU FTA may be gateway to world

Pororo the penguin and his signature aviator glasses may be joined by other world-famous Korean animations in the future due to the Korea-EU Free Trade Agreement.

This is because the pact changed the rules concerning co-productions with European companies in a way that improves their odds of being screened on the Continent.

Local firms now believe they have a better chance of scoring international hits courtesy of the FTA, according to Korea Creative Content Agency.

The trade pact, which was implemented in July, introduced a new regulation classifying any joint venture with at least 35 percent investment from Europe as “local content” within the EU. Previously, it was impossible for a Korean co-production to squeeze into this coveted category. 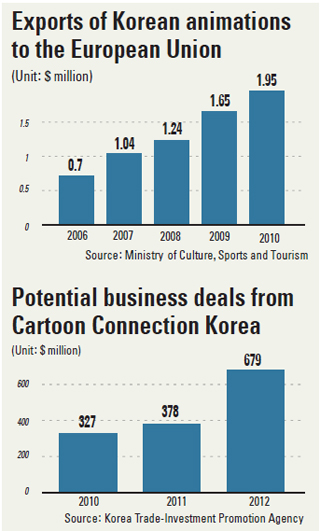 It is coveted because the EU imposes a 50 percent screen quota for animations that are considered to be locally produced. Being a part of this gives Korean firms an advantage as they do not have to compete with hundreds of animations from scores of other countries around the world.

“Unless they can get into the allotted airtime for local creations, Korean companies face fearsome competition with hundreds of non-European productions,” said Hannah Kim, a manager at the service industry division of the Korea Trade-Investment Promotion Agency (Kotra). “This naturally lowers the chances of a Korean creation being aired.”

The annual event serves as a bridge to build a communication line between European and Korean companies. A total of 113 companies from Europe, Korea and other Asian countries participated this year.

“Korea is the only country where it has continued holding this event for three consecutive years,” said Kim. This year, the convention has the potential to realize deals worth 7.6 billion won ($679 million), up 180 percent from last year, she added.

“Europe has a high demand for animations because it is a bloc-wide policy to provide funding to children’s programming,” said Pyo Soon-cheol, an official at the Ministry of Culture, Sports and Tourism. “More European investment will create more jobs.”

Perhaps inspired by the success of Pororo, other Korean firms like Synergy Media have also focused on producing computer-generated animals.

The company distributes the animated TV series “Backkom.” Better known as “Bernard” in the European market, the program about a clumsy polar bear was first aired in Korea, Spain and France in 2006, as it was co-produced by companies from all three countries. Its license has since been sold to 100 countries, according to Synergy Media, and was even nominated for the Best Animation Series award at the Stuttgart Festival of Animated Film in 2006.

“Animals are popular choices because they are truly global,” said Eugene Kang, the company’s president. “But audiences want some ‘edge’ that differentiates the characters from those they have seen before.”

Although the Korea-U.S. FTA took effect two weeks ago, industry players believe they have a better chance in Europe.

“It’s hard for Korean content-producing companies to work with American TV networks, because major channels already have a big enough audience share and do not tend to co-produce animated programs with companies overseas,” said Kang.

Seeing the fruits of more European partnerships “may take some time, but the results will be worth waiting for,” said Kim of Kotra.