Shiseido faces up to grueling market

Shiseido faces up to grueling market 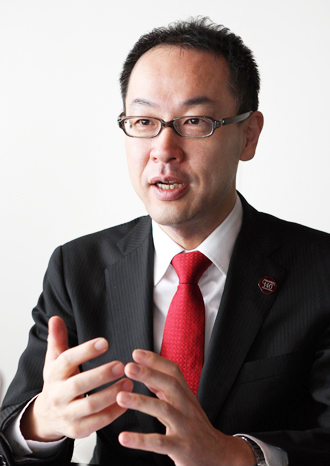 Shiseido, the world’s fifth-largest cosmetics maker with 140 years of experience under its belt, has been forced to recognize Korea as a market leader rather than tag-along follower.

A few years ago, it could rely on Koreans’ obsession with Japanese products to keep sales healthy. But with the rise of Korea’s own cosmetics industry, which has made local consumers some of the most promiscuous in the world - Koreans use more cosmetic products on a daily basis than any other nationality - that’s not good enough anymore.

So for Korea, Asia’s third-largest market, Shiseido has broken its venerable marketing rule of selling the same cosmetics it sells in Japan everywhere else. Starting last April, the company released a product designed exclusively for Korean customers after conducting research on the skin of 1,000 Korean women.

In an interview with the Korea JoongAng Daily on Thursday, Shiseido Korea CEO Kentaro Fujiwara said he is aggressively targeting Korea because a company’s image here can be transmitted to other Asian markets. 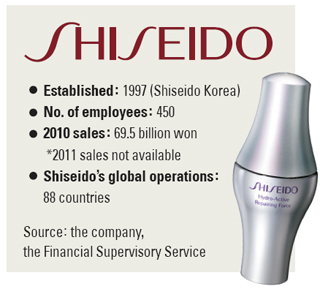 “Korea is an attractive market because it’s a trendsetter that spreads culture throughout Asia,” Fujiwara said. “Success in the Korean market will elevate the company’s overall influence in Asia. Korean customers won’t buy products simply because they’re from Japan as they did several years ago. There’s so much information out there about cosmetics, and only unique products tailored to customers’ demands will capture their hearts.”

Shiseido, which first started international sales in Taiwan in 1957, now has global operations in 88 countries. In 2010, 45 percent of its sales were generated outside of Japan.

Q. How are Korean customers different from Japanese and European customers in terms of their cosmetics preferences?

A. While Korean and Japanese customers focus on skin care, European customers have more of an interest in fragrance and makeup.

Europeans like cosmetics with a rich texture, but Koreans like products with soft textures that quickly absorb into the skin because they apply different kinds of cosmetics.

Koreans have a higher awareness of how to take care of their skin than Japanese customers, and this explains why they use more cosmetics than Japanese.

What’s the significance of the Korean market for Shiseido?

Korea is the most crucial Asian market along with China. Aside from Korea’s big cosmetics market, it is attractive because it’s a trendsetter that spreads culture throughout Asia. Success in the Korean market will elevate the company’s overall influence in Asia.

To boost sales in Korea, we will increase our investments in the market by bringing more prestige and “masstige” brands, not to mention expanding distribution channels in addition to drug stores and department stores.

We’ve only been here for 15 years. Although Korea is still a tough market for us, we will center on marketing what we’re good at, such as whitening lotions and sunscreens.

How is the product designed for Koreans doing?

More than 20,000 bottles of Shiseido’s exclusive product for Korea, Hydro-Active Repairing Force Essence, was sold, falling short of the company’s target of 30,000.

We didn’t release the Korean exclusive essence because we wanted to raise our revenues with a single product. Customers who are satisfied with the product will be eager to try other Shiseido products. This strategy will raise our entire brand awareness. We developed this product reflecting Koreans’ preference for smooth-texture cosmetics. To get Shiseido accepted in Korea, we needed a product solely dedicated to local customers. Unlike several years ago, they don’t buy products simply because they’re from Japan. That era is over.

We need to demonstrate our value to customers. That’s why we’re offering free hand massages at Shiseido stores around the world on Sunday in celebration of our 140th anniversary. We first offered free hand massages to victims of the Fukushima tsunami and nuclear accident. Some wept because their broken hearts were relieved. We will continue this service because a cosmetics firm shouldn’t focus only on improving people’s appearance, but should also care about their hearts.

Are you looking into selling this product in other markets, like China?

We’ll first focus on selling the product for three years. When we figure it’s well received by Korean customers, we may look into bringing it to other markets. If that happens, it will be significant because a cosmetic that was first created for Korean customers will go global. Korea could become a driving force contributing to the growth of other markets as well.

What do you think about Korea’s low- and mid-priced cosmetic brands, which are popular in Japan?

Korean cosmetics are well received in Japan thanks to the growing popularity of Korean culture. It’s interesting how the new market was created and how Japanese and Chinese customers are appreciating the products. What our competitors are doing now has generated a plus effect, as it rejuvenates the Japanese cosmetics market. We now set our new marketing strategies after closely monitoring the latest trend of booming Korean cosmetics.

Some Korean customers are concerned with the safety of Japanese products. Should they be?