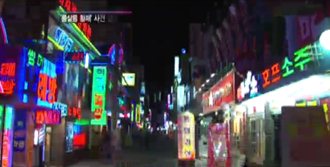 Prosecutors said they have found police officers in Seoul receiving bribes from more than 100 room salon (hostess bar) owners regularly in return for covering up the owners’ violations in the last five years.

The Seoul Central Prosecutors’ Office yesterday said the 40-year-old room salon owner Lee Gyeong-bok, or so-called room salon king, who had been under investigation for hiring teenage hostesses and evading tax disclosure in Gangnam, southern Seoul, has given out large sums of hush money to incumbent police officer surnamed Lee of the Seoul Metropolitan Police Agency in order to cover up violations since 2007.

Prosecutors said they will expand their investigations into the alleged bribery case because of the high possibility other police officers are involved.

“More than a dozen room salon owners in Gangnam have paid out more than 5 billion won ($4.42 million) to the officer,” Lee told the prosecutors during a query held on Monday.

“Officer Lee has a secret notebook where he recorded the money he took from the room salon owners.”

Lee added that each owner paid 2 million won to 10 million won monthly. The officer is also suspected of purchasing imported luxury sedans such as a Land Rover Discovery 4 and Chrysler 3000 in 2008 with the money he extorted.

“We judge that the testimony from Lee is reliable,” a spokesman of the prosecution told the JoongAng Ilbo. “Lee also said that most room salons that have at least more than 10 rooms in their shops are bribing police officers.”

The prosecutors said they have secured a list of names of room salons in Yeoksam-dong and Samseong-dong in southern Seoul, as well as illegal massage places, that bribed Lee.

The prosecutors said these shops are very famous for their sex services, disguising themselves as normal bars but employing their hostesses or masseuses as prostitutes.

The prosecutors also said that the officers traveled to Thailand seven to eight times since 2007 for golf, staying for more than 10 days on each occasion. Officer Lee plainly asked the room salon owners to pay his golf fees.

The prosecutors detained four officers including Lee yesterday for receiving bribes including cash, golf lesson fees and luxurious designer goods, four days after they filed warrants to detain them.

The prosecutors also raided their homes, vehicles and offices simultaneously on the same day and confiscated 200 million won worth of designer goods, including brand names such as Hermes, Mont Blanc and Armani, as well as golf clubs.

Lee is denying the allegations. “The found designer goods are all imitations and the cars belong to my father-in-law,” he said.

Lee runs 16 room salons in Gangnam and was arrested in July 2010 for hiring teenage hostesses and not paying 420 million won in back taxes. Lee was released on 150 million won bail in September, but was arrested by the prosecutors again in July last year.