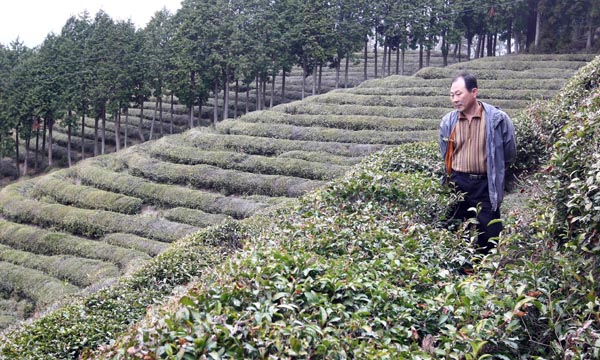 Joo Byung-seok, an owner of a green tea farm in Hoecheon-myeon, Boseong County in South Jeolla looks around his plantation. Though he owns a 33,058-square-meter (8.2-acre) farm, concerns have risen in recent years as the popularity of green tea products declines in favor of coffee. By Oh Jong-chan

Though it is the time of the year when young tea buds into high-quality Sejak and Woojeon green teas, the number of people looking for the hand-picked, harvested teas has declined this year from the previous year. 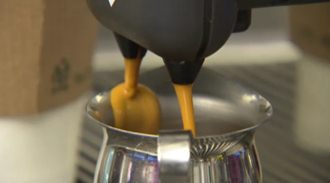 Suh said that even until the mid- and late-2000s, he had earned around 70 million won ($62,160) every year selling green tea products, of which 30 million won was profit. Things started to change, however, starting in 2008, when his income dropped in half.

“The demand for green tea dropped significantly because of the growing popularity of coffee in Korea,” said Suh, who is also the head of the Confederation of Boseong Green Tea Farmers.

The recent coffee craze in Korea has changed the entire tea industry in Boseong, which is regarded as Korea’s tea-growing Mecca, accounting for up to 40 percent of the country’s total tea production.

Green tea consumption started to decrease significantly two or three years ago. According to sources, most of the small green tea farms less than one acre in size have already closed down or are preparing to do so.

“Even until the mid-2000s, people enjoyed both green tea and coffee,” said Shin Moon-soo, an official from Boseong County in charge of boosting the area’s green tea industry. “Now, there is hardly anyone looking for green tea, and small farmers have no choice but to give up their living.”

What’s even worse, decreased demand led to a plunge in the price of green tea.

“There are many coffee advertisements and commercials, and products are promoted through soap operas and films, whereas there is a lack of promotional efforts when it comes to green tea,” said a tea farm owner surnamed Choi. “There should be more efforts in promoting green tea that is good for your health.”