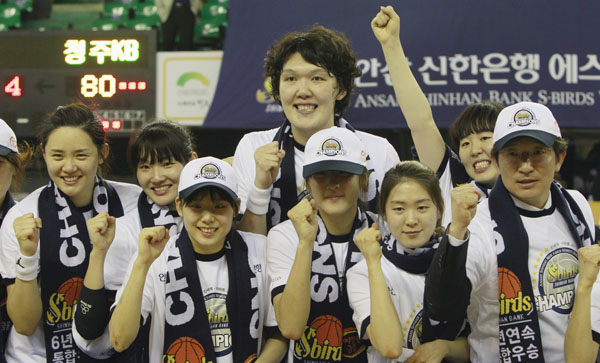 
It’s not really fun to watch sports when one team simply dominates the league, but watching the Ansan Shinhan Bank S-birds win the Women’s Korean Basketball League is different.

Previously, women’s volleyball club Honam Oil Refinery, now GS Caltex Kixx, won nine consecutive years from 1991 to 1999 in the Volleyball Super League, but that was during the amateur days when there was no playoff format.

In baseball, the Haitai Tigers, now the Kia Tigers, claimed four consecutive Korea Series from 1986 to 1989, but throughout that time the team had claimed only one regular season title in 1988.

For one team to dominate the league for such a long time, the core of its roster generally remains in tact.

And most coaches from that dominating club are often denounced by others as just benefiting from star players, not leading the team to victory through his tactics.

This criticism was no exception for S-birds coach Lim Dal-shik, who took the helm in 2007 and guided the team’s top performance from there.

But what’s special for the 47-year-old coach to make this team historic is that he continuously renovated the team, recruiting young members without signing star players season after season.

Today, the S-birds players are all well-known to WKBL fans, but back in the day when Lim first took the job, only Chun Joo-won and Jung Sun-min could be called star players. But Lim didn’t complain about the squad as he started to recruit other players after rigorous training and practices to implement his tactics.

Through this process, current starting members such as Kang Young-sook, Lee Yeon-hwa, Kim Dan-bi, Kim Yeon-ju and Choi Yoon-ah started to grow, and it paid off this season.

The S-birds were expected to be weaker than they were last season because of the retirement of veterans Chun and Jin Mi-jung, while forward Jung, the first Korean to play in the WKBL, moved to the Stars. But with the above-mentioned players stepping up and filling the void, securing the No. 1 position was no mission impossible. It proved Lim also had talent in rebuilding the team.

Some argue that even though Lim raised those other players, the team still benefited from having the 202-centimeter (6 feet, 7 inches) center Ha Eun-joo, who was named the Finals MVP two years in a row.

Ha, the tallest player in the WKBL, is certainly the biggest weapon that the S-birds have. But she spends little time on the court, averaging only about 17 minutes in the game because of injury worries. With such height, she is reported to have a bad knee condition.

If Ha, who is the 28-year-old sister of Ha Seung-jin of Jeonju KCC Egis, had played full minutes through the season, the S-birds would have achieved the record more easily, but the truth is she didn’t. This also means that Lim has effectively used her when the team needed it most.

For champions like the S-birds, every season is a challenge and a burden because the other five teams are always looking in their direction. It requires the team to upgrade itself every season so that other teams can’t catch up.

In reverse thinking, this means while the S-birds were making successful runs in the last six seasons, other teams couldn’t just come up with the brilliant idea to catch them. Before denting the S-birds’ record, the other five clubs should look at themselves to figure out why they have failed to snatch the title.

The S-birds are now facing their biggest challenge just days after the season ended. Center Ha and shooting guard Lee will be free agents, while coach Lim’s contract also ends.

The S-birds’ bid to extend their record to seven consecutive double crowns will be influenced by whether those three members remain or not. Especially, the team should renew coach Lim’s contract, as he is the one behind the dynasty.