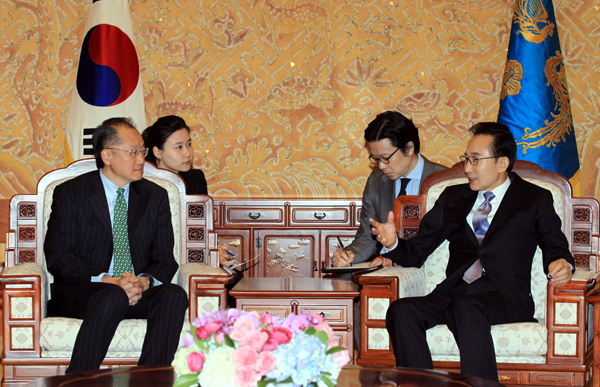 Officials expressed their wholehearted support for the Korean-American candidate. Some even defended his lack of experience in economics, as well as his perceived skepticism of economic development in third world countries.

Kim’s tight schedule saw him visit Finance Minister Bahk Jae-wan in the morning and gain an audience with President Lee Myung-bak in the afternoon on the last day of his two-day stay.

Officials glowed with praise. “Once again, I saw that he is most qualified to become the president [of the World Bank],” said Bahk, after his breakfast meeting with Kim. “He has everything, including a passion for impoverished countries, and is educated not only in matters of health and medicine but also in anthropology and other humanities. He also possesses on-the-ground experience in developing nations.”

President Lee also expressed his strong support for Kim, saying he believes the Korean-born health and development expert is the right person to lead and reform the global institution.

“Korea has received a lot of help from the World Bank in the past,” Lee said. “I believe the right person has been nominated at a time when the World Bank needs change.”

Kim, the president of Dartmouth College in the U.S. and a pioneer in the treatment of HIV, AIDS and tuberculosis, is a highly respected anthropologist and physician who cofounded the nonprofit Partners in Health. He also served as a former director of the HIV-AIDS department at the World Health Organization.

Critics have pointed to his comparative lack of experience in promoting economic growth, with Bloomberg quoting Uri Dadush, a former World Bank director of economic policy, as saying that “the World Bank has to be primarily, in my view, about growth, because without growth you cannot develop health and education.”

For the first time since the bank’s founding, two opposing candidates have emerged to try and capitalize on Kim’s perceived lack of economic credentials. They are Ngozi Okonjo-Iweala, Nigeria’s finance minister and a former managing director at the World Bank, and Jose Antonio Ocampo, Colombia’s former finance minister.

However, with Japan backing Kim after his visit there, he appears to be a shoo-in for the job. The World Bank is expected to choose its next president on April 16.