Fighting through the odds, no matter what

Fighting through the odds, no matter what 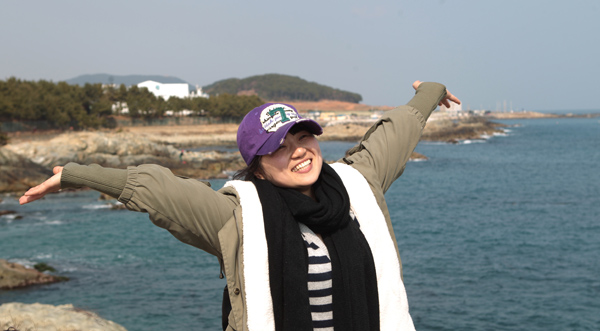 
Fighting one type of cancer is difficult enough - but Jang Jo-eun, a 32-year-old from Milyang, South Gyeongsang, has battled with three.

According to Yonsei University’s Severance Hospital Cancer Center, 5.2 percent of the 4,600 cancer patients who survived for at least 10 years after diagnoses had suffered from two cancer types. It was very rare for a patient to survive for at least a decade after being diagnosed with three or more cancer types.

When the JoongAng Ilbo called Jang to ask about her struggle with three types of cancer in mid-February, she was eager to share her story.

Jang showed up to the interview in Busan with her friend Kim Min-ok wearing a purple baseball cap to hide her hair, thinned from chemotherapy.

Jang said that she felt as though her life as a woman had ended. She said she wanted to enjoy her early 20s, dressing up and dating boys like all her friends, but this was something that was “only allowed in [her] dreams.”

In 2003, she became a freshman after a five-year delay, majoring in food and nutrition and minoring in special education. When she graduated in 2007, Jang said she didn’t even try to interview for jobs as she had to travel to Seoul frequently to receive treatment at Severance Hospital.

Instead, she began working as a visiting teacher to educate disabled children. She said she felt like her life that was once falling apart was slowly pulling itself back together.

But in September of that same year, Jang was diagnosed with Stage IV rectal cancer. Doctors told her she only had about seven months left - but she didn’t give up.

“As I had suffered from cancer since I was young, I had this faith that it would be okay this time as well,” Jang said.

Doctors were able to shrink the cancerous area by removing parts of her colon and liver while continuing chemotherapy. Five years later, she still travels to Seoul to receive chemo every week.

“As the technology develops, patients should never give up on fighting despite being diagnosed with the final stage,” said Jeong Hyun-cheol, director of the Yonsei Cancer Center.

“We were able to decrease the number of cancer cells in Jang using a recently developed cancer therapy.”