With wisdom and courage, a nun finds peace in Stage III

With wisdom and courage, a nun finds peace in Stage III 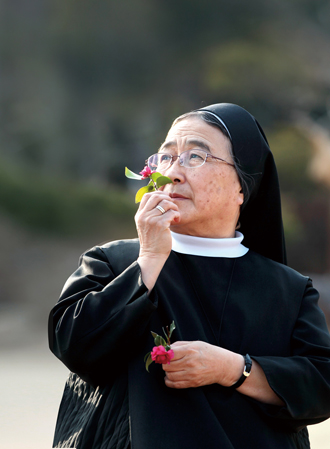 Lee Hae-in, a nun at the Olivetan Benedictine Sisters in Busan, has battled with colon cancer.

Cancer survivor Lee Hae-in said she never imagined she would be diagnosed with cancer.

When the JoongAng Ilbo reporter entered the Olivetan Benedictine Sisters of Busan convent near Gwanganri Beach in Busan on a Friday afternoon, Lee, a 67-year-old nun, brought two camellias blooms.

Lee said she had never before laid bare her fight with cancer as she thought she was “no different than other patients.”

It was the summer of 2008 when Lee found out she had cancer. One day in June of that year, she felt something was blocking her intestine. The next day she was diagnosed with Stage III colon cancer. She said she had previously seen blood in her stool, but disregarded it, assuming it was just a hemorrhoid.

“While I was getting examined at the hospital, I thought it would be something minor. I never imagined it would be cancer,” she said.

“I was shocked and terrified when the doctor told me I was in stage three of colon cancer. I thought cancer was something that others got, not me,” Lee said, adding that she thought she should start practicing to say goodbye to the world.

“When I asked the doctor what my chances of survival were, he told me only God would know that. After the surgery, I received 30 anticancer serum injections, went through 28 rounds of chemotherapy and took anticancer drugs for two years.”

Recalling her days of struggle, Lee said she became hard on herself.

“Once you surrender to your impulse to refuse food during the treatment, there’s no end to it. I tried to eat as much as I could, thinking that I was going through some kind of cultivation of moral sense.”

Doctors told her that the cancer had spread to some other areas, but Lee said she didn’t budge. “I think it was important to never get gloomy.”

Lee decided to organize a group for cancer patients within the convent called the “Wild Rose.” Currently, there are six to seven members.

They pass books about cancer around and talk about their feelings and struggles. After the meeting, they each write a diary. Lee said when there’s a new cancer patient within the convent, she sends a letter of encouragement.

It has been four years since she was first diagnosed with cancer but said she has been taking care of herself and that her health condition is no longer a barrier to her daily life.

Lee visits the hospital every six months for a checkup.

“I live each day as though it is my last. Every day feels like a miracle.

“Everything has a meaning and the suffering and the hardships that the cancer brought me also was meaningful. I could sympathize with a quote from one of the Church Fathers that tears and suffering turn into pearls.

“I tried to accept the reality that can’t be changed and rather than hating cancer and struggling with it, I decided to have a good heart and treat it like a companion that wants to be with me for a while.

“I think that’s why it is restraining itself from spreading to other parts of my body.”

Lee said that regular checkups to see if she’s cancer free are always anxiety-inducing, but said she wants to endure it and “live a life that can be a beacon of hope for others.”

“Patients should try to not blame the reality of the situation or the past and instead gain wisdom and courage in the face of adversity.”