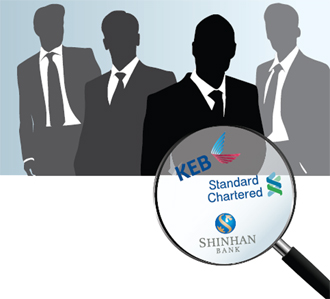 A week ago on the 20th floor of Shinhan Bank’s headquarters in Seoul, a group of shareholders unanimously agreed to adopt a new auditing system. Instead of the full-time in-house auditor, the shareholders accepted an auditing vehicle consisting of outside directors.

As a result, Shinhan became the third bank in the country to scrap its full-time in-house auditor in a bid to enhance transparency.

Korea Exchange Bank started the trend when it was under the management of U.S. fund Lone Star, and SC Korea later followed suit.

Meanwhile, Hana Financial Group Chairman Kim Jung-tai said at a press briefing earlier this month that he plans on implementing the new auditing system at Hana Bank. The group ranks as the only financial holding company in Korea to have done the same.

As the trend spreads across the banking industry, hopes are being raised that auditing-related corruption will be greatly reduced due to the elimination of collusive links with government figures.

“Instead of naming a full-time in-house auditor, a committee made of outside directors will oversee our accounting processes to boost the soundness and transparency of management,” said a Shinhan Bank official. “The committee will be much more independent and act as a counterforce to the bank’s management and board of directors.”

The changes come after a wave of corruption scandals involving full-time auditors was exposed during a nationwide crackdown on the savings bank industry last year by financial regulators.

It turned out that most of the full-time auditors at the savings banks were former government officials. Many had been parachuted down from major oversight organizations such as the Financial Services Commission, Financial Supervisory Service, Board of Audit and Inspection, National Tax Service, and even the Ministry of Strategy and Finance.

The posts were filled by similar figures at commercial banks.

The major role of these auditors was to prevent government bodies from conducting inspections of the banks’ books using their personal connections and strong ties. Therefore, it was considered an easy job with high pay for retiring government officials.

Until last May, Shinhan had a full-time auditor who formerly served as a high-ranking official from the FSS. The official left the post after the savings bank controversy got worse.

Only Korean and Japanese companies have full-time auditors, and the position is decided at shareholders’ meetings. In contrast, in the U.S. and Europe, auditing is one of the jobs assigned to the board of directors to provide proper checks and balances on management.

However, since the Asian financial crisis in 1997, many Korean companies have begun adopting the U.S. system. This sees listed companies with assets of 2 trillion won ($1.8 billion) or more create an auditing committee where two-thirds of the positions are occupied by outside directors.

But until recently, the banking industry has bucked the trend by continuing to hire a full-time director culled from the ranks of former government officials.

As the influence of these full-time directors was blamed for leading to the insolvency and irregularities of savings banks, FSC Chairman Kim Seok-dong warned last year against recruiting retired government officials.

While the auditing reshuffle is building high hopes of cleaner practices in the local banking industry, skeptics call attention to the fact that senior management still retains much influence over outside directors.

“The shift to auditing committees made of outside directors can only be considered successful if a system is created that blocks the influence of top management or largest shareholders,” said Kim Sang-jo, a professor at Hansung University. He added that committees picked by the banks’ top executives cannot realistically be considered independent.

For such a system to be possible, the regulations and oversight of financial regulators must first be improved, according to an official in the banking industry requesting anonymity.

“The recent trend of abolishing full-time auditors is being welcomed by the market, especially as the independence and objectivity of the monitors is expected to improve,” the official said.

“However, the auditing committee will only be successful when regulators’ inspections and regulations become more transparent.”