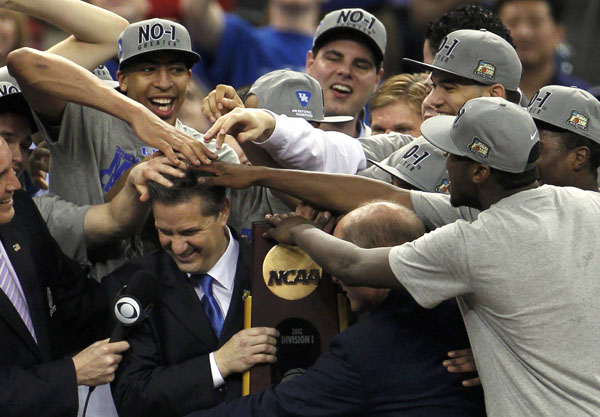 Kentucky Wildcats forward Anthony Davis, top left, and other players mess up the hair of head coach John Calipari as he holds the championship trophy after defeating the Kansas Jayhawks in the men’s NCAA Final Four championship basketball game in New Orleans on Monday. [REUTERS/YONHAP]


NEW ORLEANS - Impressive freshman Anthony Davis struggled to find the hoop but proved dominant in other phases of the game to lead Kentucky to an eighth national basketball championship with a 67-59 victory over Kansas on Monday.

Davis has been brilliant all season and despite connecting on just one-of-10 shots, the tournament drawcard had 16 rebounds, six blocks and five assists to power the Wildcats to their first title since 1998.

“It’s not hard to take a backseat, especially when playing with a great group of guys,” said Davis, who remained scoreless when the Wildcats reached halftime with a 41-27 lead.

“All these guys could play. I knew I was struggling. So I told them, ‘I’m going to defend and rebound, you all make all the points.’ That’s what they did tonight.”

Kentucky (38-2) dominated the first half but had to weather a late Kansas rally that cut the advantage to 62-57 on two free throws by Thomas Robinson with 1:37 left.

However, the Wildcats hit five of seven free throws down the stretch to seal the triumph and delight the largely blue-and-white-clad, pro-Kentucky crowd at the Louisiana Superdome.

“I’m glad it’s done,” said Calipari, who has compiled a staggering 102-14 record since arriving in Lexington three years ago.

“Now I can get about my business of coaching basketball and getting these players to be the best that they can be, helping young people create better lives for themselves and their families, and also helping them prepare for life after basketball.”

Kansas (32-7) had problems in their four previous tournament games but found a way to win each time. On Monday, the magic ran out.

“It sucks that we have to be down 14 before we want to start fighting. Guess that’s kind of what happened. The fight never stops with us. We were right there. Right there. But they’re a great team.”

Thomas Robinson scored 18 points and had 17 rebounds, but the muscular All-America forward hit only six-of-17 shots. He tipped his hat to Davis, who was named the most outstanding player of the Final Four.

“Anthony is a great player,” he said. “You see he impacted the game without even scoring today. That’s just what he does.”