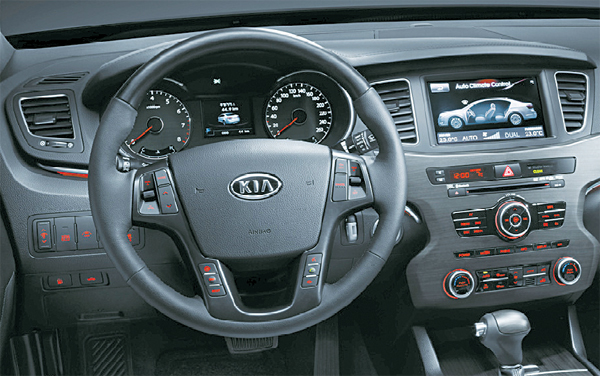 Local companies are rushing to produce semiconductors for the automotive industry, as electronic devices are increasingly viewed as essential components for cars.

Hyundai Motor Group said recently it will invest 100 billion won ($89 million) in Hyundai Carnes, its subsidiary that specializes in developing software for nonmemory chips. Hyundai Motor, Kia Motors and Hyundai Mobis will together invest in the firm, which is expected to undergo a name change and hire more engineers.

Samsung Electronics also said last month it will expand its production of auto semiconductors this year.

In fact, industry observers say automobiles are experiencing a radical transformation from purely mechanical products to get from A to B to electronic goods as more IT gadgetry is installed in them with each passing year.

“Passenger cars are currently equipped with 250 to 400 chips per vehicle,” a semiconductor industry official said. “In the past, local companies focused on developing infotainment systems, but now they are trying to develop key semiconductors independently.”

Electronic components account for 20 to 30 percent of the cost of a vehicle nowadays, and the figure is expected to grow to 40 percent by 2015.

Semiconductors are used for various purposes and devices in the vehicle including cruise control, heating seats, steering wheel operations and an assist system that helps drivers stay in their lane. Chips also help control fuel injection systems and monitor the temperature both inside and outside the vehicle.

“Until now, domestic automakers have depended on foreign companies for their semiconductors,” said Eric Choi, an analyst at Shinhan Investment Corp. He added that more electronics equipment will be used in automobiles in the future, driving up demand for chips.

However, Korea’s auto semiconductor industry is extremely limited. Although locally-produced chips are used for cars’ infotainment systems including audio and navigation tools, semiconductors that control essential devices such as power trains and safety assist systems are all imported.

Korea is a leading manufacturer of memory chips, but it relies heavily on foreign companies like Freescale Semiconductor, Bosch and Infineon Technologies when it comes to outfitting cars with chips.

And with the advent of a more ecologically aware age and the rise of hybrid cars and electric vehicles, demand for such semiconductors could boom as they play an even larger role in such forms of transport.

Auto semiconductors are more difficult to make than those used for consumer goods, as they operate in a more demanding environment. Chips for mobile handsets are designed to operate at temperatures of between 0 and 40 degrees Celsius (32 to 104 degrees Fahrenheit), but those used in cars should be able to survive at between minus 40 and 155 degrees Celsius.

They also need to be extremely durable because any malfunction could be harmful to passengers. 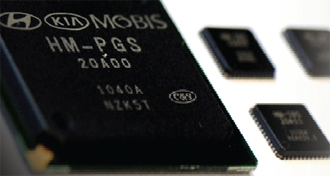 “There are safety issues related to automobiles which mean that the chips used in consumer electronics or industrial goods cannot directly be used,” a Hyundai spokesman said. “In order to upgrade our products, we need to obtain advanced technologies for materials and components.”

There are also other problems. Demand is relatively low compared to that for memory chips used in consumer goods because auto semiconductors are often customized, making it hard for companies to achieve acceptable economies of scale.

For example, global sales of a popular cell phone may realistically hit 10 million units a year, compared to just 500,000 units of a top-selling Korean passenger vehicle like Hyundai’s Sonata.

Hyundai Carnes, Hyundai Mobis, Hyundai Motor and Kia Motors are now involved in designing and testing auto semiconductors, whereas previously they relied on foreign companies to design and produce them.

Meanwhile, Samsung Electronics said it plans to commercialize some of its semiconductors for automobiles this year, including its microcontroller and body controller units.

The company said it has already developed the chips as part of an industrial project led by the Ministry of Knowledge Economy.

Samsung has developed and supplied chips for smart keys, rear cameras and temperature sensors used in automobiles made by local companies. Now it intends to sell those products to foreign automakers as well, it said.

The company decided to expand this part of its business due to the rapid growth of the niche chip market, it added.

According to the World Semiconductor Trade Statistics, an industry body, auto semiconductors made up 8 percent of the world’s chip market in 2011 but will grow to 10 percent this year.