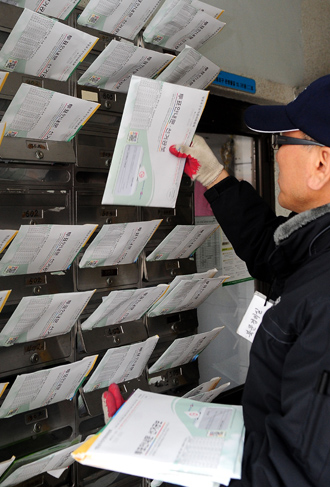 Carried away by an expanding scandal about illegal spying by the Prime Minister’s Office, the ruling and opposition parties are falling deeper and deeper into the vortex of mudslinging ahead of next week’s general election and pledges of policies have disappeared from the campaign.

The political storm began March 2 when Jang Jin-su, a 39-year-old former public ethics official of the Prime Minister’s Office, said the Blue House had ordered him to destroy evidence of illegal spying on government critics and rivals dating to 2008. Jang made a series of revelations, claiming that he was offered bribes to remain silent and that President Lee Myung-bak had been briefed about the case.

The public ethics division is in charge of rooting out corruption by civil servants. It’s not supposed to investigate non-civil servants.

The scandal reached a second peak when a labor union of broadcaster KBS, which has been on strike over political interference in its coverage, made public exclusively obtained reports from the Prime Minister’s Office that suggested a massive illegal spying operation.

The Democratic United Party joined the attacks against the Lee administration, and the Blue House countered by saying much of the spying was done by the Roh Moo-hyun government.

The Democratic United Party said yesterday that a National Assembly hearing must be held immediately after the April 11 general election and President Lee and the ruling Saenuri Party leader Park Geun-hye must testify.

The largest opposition party said Lee must make clear if he ordered illegal spying, was briefed about the results of the surveillance and ordered a cover-up.

Park said yesterday that the DUP should have accepted the Saenuri Party’s proposal to appoint an independent counsel to look into the scandal. “What’s the motive of the opposition party?” Park asked. “Does it want to reveal the truth about the illegal spying operation or simply use it for the election campaign?”

After all the negative campaigning, the National Election Commission said yesterday it will launch a week-long campaign to promote candidates talking about policies starting today.

The major political parties didn’t respond to that proposal.

“In addition to the fundamental efforts to eradicate the illegal surveillance operation, political parties must normalize their election campaigns,” said Jaung Hoon, a political science professor of Chung-Ang University.

Contributing to the campaign mayhem are strikes currently ongoing at KBS, MBC, YTN and the Yonhap News Agency, all of which complain about political interference. As the major media players were paralyzed, voters’ access to information on candidates and their pledges about policies has dried up.

The prosecution launched a reinvestigation of the illegal spying in March and is expanding its probe by seeking warrants to detain former Blue House officials involved in the case.

“No matter what conclusion we will have, the politicians will go ahead with an independent counsel probe,” a prosecutor said. “But for the prosecution to save face, it must investigate all suspicions that have been raised so far.”