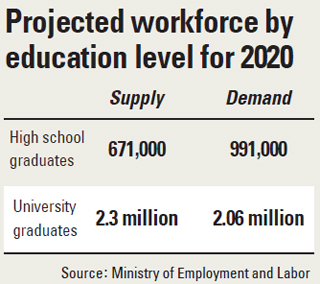 Korea will substantially lack high school graduates in the job market in the years to come, government data showed yesterday.

According to a report released by the Ministry of Employment and Labor on the country’s mid- and long-term workforce outlook, Korea will be short nearly 320,000 high school graduates in the workforce in the upcoming 10 years.

In contrast, there will be more than enough university graduates in the domestic work environment.

Ministry data showed that by 2020, 2.3 million workers with university diplomas will be searching for jobs, but there will only be 2.06 million jobs at their education level.

“One of the big social problems Korea has been facing and is expected to face continuously in the future is that the number of higher-educated men and women is growing, but they are having a difficult time finding jobs,” said Yoon Ok-kyun, an official from the Labor Ministry. More than 80 percent of Koreans enter universities.

“Many jobs are being created based on the country’s economic growth, but they are mainly in the service and social welfare sectors that are in need of workers with a lower educational background,” Yoon said.

According to the report, 73.4 percent of the employed workers in 2020 will be engaged in the service industry.

Yoon added that job seekers with bachelor’s degrees will face a difficult time finding work, while firms will have difficulty looking for high school graduates to fill their posts for work that does not require a high level of education.

As part of efforts to balance supply and demand in the workforce based on the educational level, the Labor Ministry introduced measures including restructuring the number of universities in the long term and diversifying career development programs.

Overall, the data showed that the economically-active population will be 27.1 million in 2020, rising from the 26.3 million estimate for 2015. The unemployment rate in 2020 is forecast to be 3.6 percent. In February of this year, the number of economically-active workers came to 24.82 million, up 1.6 percent from the same month a year earlier, while the unemployment rate was 4.2 percent.