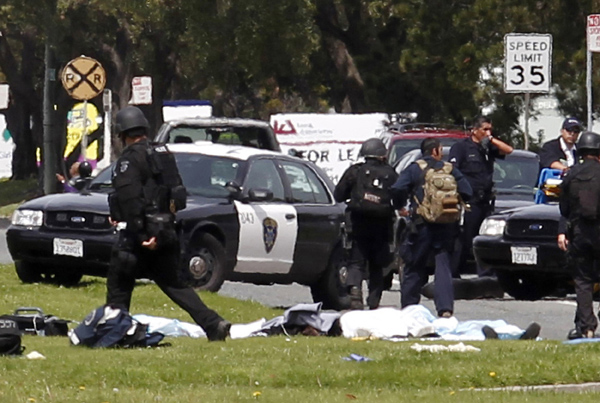 Oakland Police attend to the dead and wounded after a school shooting at Oikos University in Oakland, California, Monday. A Korean gunman allegedly opened fire at the school, killing at least seven people, law enforcement sources close to the investigation said. Police have a suspect in custody who used to attend the school. [REUTERS/YONHAP]


SAN FRANCISCO - An embittered Korean nursing student went on a rampage at a Korean-run religious college in California, killing seven people and wounding three others, according to the local police and witnesses.

The suspect, Goh One-il, 43, was a nursing student at Oikos University, located near Oakland International Airport, until he dropped out recently. In the U.S., he went by the name One L. Goh. It’s unclear whether he is a naturalized U.S. citizen or a permanent resident.

Of the seven fatalities, one was an ethnic Korean, witnesses told the JoongAng Ilbo.

Witnesses said Goh entered the school at 10:33 a.m. Monday, fatally shot a female administrative official at a front desk and then entered a nursing class, where he fired dozens of shots from a handgun. A total of 14 students were in the class, and six of them, including Korean student Sim Hyeon-ju, were killed and three injured, they said. The police have yet to identify the other victims.

Witnesses said there were about 50 students taking classes at the school at the time of the shooting. One ESL instructor said he escaped with more than 10 students out of the building as soon as he heard the shots.

After the shooting, police evacuated the school and sealed off roads around it. A SWAT team was mobilized to search for the suspect.

About one and a half hours later, Goh approached a security guard at a Safeway grocery store in Alameda, about three miles away from the school, and said he had shot people. He was apprehended by police sent to the grocery store.

Oakland Police Chief Howard Jordan told media Monday evening that they had yet to determine the motive behind the killings, but it may be a grudge. Goh enrolled in the intensive nursing course at the school in February 2011 but dropped out several months ago. Recently, he returned to the school and demanded reimbursement of his tuition, school officials said. He confronted an administrative officer who explained the refund was impossible under school rules.

Students who know Goh said he had been under pressure to make up the class and was having trouble making ends meet. The course prepares students to take a licensing test to become a nurse in the U.S. in one year rather than the usual two.

Goh had worked for a Korean grain wholesaler for a Korean supermarket. He was known to be a divorcee and to have one daughter from the failed marriage. His father lives in the Bay Area.

The college was founded by Korean pastor Kim Jong-in as a branch of Shepherd University in Los Angeles and went independent as Oikos University in 2007. The college gives classes in music, theology, nursing and oriental medicine.

Pastor Kim, who founded the school about 10 years ago, told the Oakland Tribune that he did not know if Goh was expelled or dropped out. Kim said he heard about 30 rapid-fire gunshots in the building.