Only 2.5% of overseas Koreans voted

Only 2.5% of overseas Koreans voted 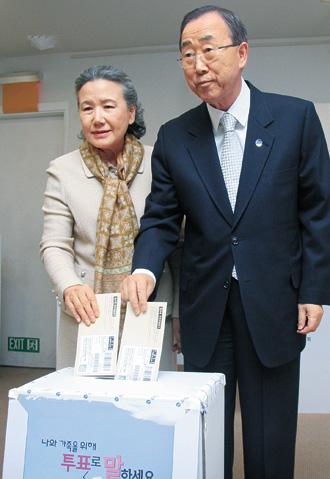 Voting by Koreans overseas for the general election wrapped up yesterday with less than 50 percent of those registered turning out to vote, according to the election commission.

A total of 56,456 Koreans cast a vote in ballot boxes set up in 158 diplomatic posts in 107 countries during the March 28 to April 2 voting period, the National Election Commission said yesterday.

There were 2.23 million Koreans overseas eligible to vote, meaning only 2.53 percent of them voted.

That has triggered criticism that overseas voting isn’t worth the cost involved.

The election watchdog spent 230,000 won in administrative costs for each overseas voter compared with 8,427 won per head in the last general election in 2008.

Revisions to the election law in 2009 gave overseas Koreans the right to vote in major local elections, and the April 11 polls are the first.

“I know that many people were hesitant to vote because it was the first overseas vote and they were not accustomed to the voting method,” Seo Jae-young, a Korean consular official who oversaw the vote in California, told the JoongAng Ilbo. “I expect more Koreans overseas will vote in the presidential election in December.”

A shortage of polling stations was a major obstacle. In the U.S., where there were 866,000 eligible voters, voting was only possible in 12 places.

Choi Young-mi, a 49-year-old Korean living in Milpitas, Calif., voted in the Korean Consulate in San Francisco on Tuesday. “It was a valuable opportunity to know that my right to vote is respected,” Choi said.

The ballot boxes will be flown to Korea and opened after the domestic vote for the general election ends on April 11, the election watchdog said.