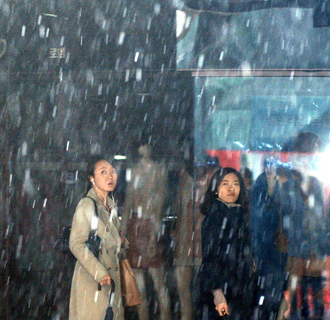 April should be cherry blossom season, but instead of a shower of flower petals, bewildered Seoulites were greeted with snowfall yesterday following icy rain nationwide. The last time Korea’s capital saw snow in April was 19 years ago. While the snow in Seoul melted, two centimeters (0.75 inches) piled up by 10 a.m. yesterday in Dongducheon, Gyeonggi. Gangwon got up to 10 centimeters. The abnormal weather is attributed to cold air from the northwest meeting with warm winds from the south, resulting in the torrential rains over the peninsula, the Korea Meteorological Administration said. Temperatures will return to spring standards today, according to the KMA. [NEWSIS]