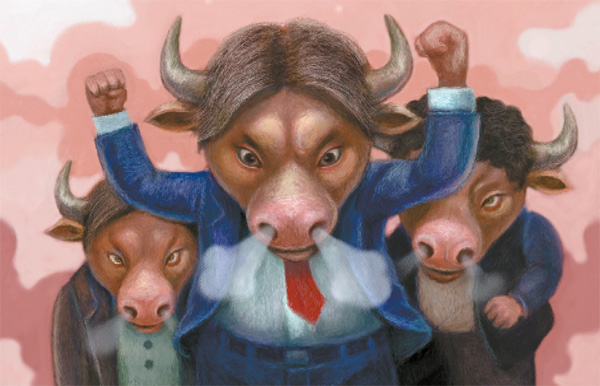 Koreans have long taken pride in their manners, often touting themselves as coming from “a country of courteous people.”

But a recent series of headlines seems to challenge that idea. The deadly rampage by a Korean-American in California Monday, in which seven students were killed, was the most shocking. But recent stories in Korea were bad too, including a man who set fire to cars after a fight with his wife; a woman who punched a man for stepping on her toe in the subway; and a woman who assaulted a high-school girl at a supermarket for jaywalking.

In particular, the latter two incidents - which were captured on video by onlookers and CCTV cameras and disseminated on the Internet and in the media - seem to indicate that anyone could easily have been the victim of any one of these incidents.

So what is going on? Why does it seem like the entire country suddenly needs an anger management session?

Observers say Korea has always been a highly competitive and passionate society, full of a “ppali ppali” (“rush rush”) spirit. In recent years, however, the traditional family structure has collapsed and the number of exacerbating stress factors has increased. In addition, the ability to express strong opinions is valued over past virtues like obedience and patience.

Last Monday, the railroad special forces arrested a man known as the “Gyeongchun Line Outlaw,” alleviating the fears of those who use that line of the Korean subway system.

The 63-year-old man surnamed Eom is charged with assaulting a 78-year-old man surnamed Kim on Feb. 25 on the Gyeongchun Line. Eom claimed he was upset after getting into an argument over who should get a seat on the train. An onlooker filmed the scene and spread it on YouTube. In it, a well-built Eom is seen punching a senile Kim and knocking him down.

“We will track down other outlaws [like Eom] in the future and punish them according to the law, so that we can restore order on public transportation and ensure a safe and convenient service and environment,” said a representative from the Ministry of Land, Transport and Maritime Affairs, which operates the special forces.

The problem is that the “Gyeongchun Line Outlaw” is hardly the only person to have committed this type of crime in recent years.

In addition to him, there is “Cursing Subway Girl” (the young woman who attacked a man after he stepped on her toe), “Supermarket Assault Woman” (the woman who beat up a high-school girl at a supermarket for jaywalking), and the “Swearing Taxicab Girl” (a young woman who hurled abusive language at a cab driver for being unsure of the directions).

And what’s worse, it appears the list of such anger-filled attackers is only getting longer.

“The Republic of Korea is also the ‘republic of anger,’?” said Heo Woo-seong, a philosophy professor at Kyung Hee University.

“Politicians belittling their rivals, demonstrations on the streets, the malicious posts swamping the Internet and having the world’s highest suicide rate all attest to that. But anger begets anger. Anger in political circles spills over into society and affects families.”

According to data from the Supreme Prosecutors’ Office, 43.3 percent of those charged with murder in 2010, the year for which the latest data is available, said a “sudden loss of temper” was their motivation for the crime.

“The scary thing about these crimes committed out of anger is that anybody can be the assaulter and anybody the victim,” Choi Hang-seop, a sociology professor at Kookmin University, said.

“Only a few people come out ‘winners’ in the neck-and-neck competition we have these days and the majority of them wind up being ‘losers.’ In that situation, when people face seemingly insulting or condescending attitudes or remarks, they get furious and that furor is expressed as an act of extreme violence and retaliation.”

Some observers say the reason for all of this pent-up rage is the family - or the lack of it, to be exact.

“In modern Korean society, family members have less of a chance at controlling each others’ actions, and children often grow up without mastering independent control over their desires,” said Lee Soo-jeong, a criminal psychology professor at Kyonggi University in Suwon. “Such a change in the social structure has a lot to do with the recent increase in violent crime.”

“If there is just one person to whom a person feels they can speak to heart-to-heart, they don’t let their anger out through recklessly violent crimes,” she said. “But today, the family, the primary community, is dissolving and the elderly, who used to teach their family members how to manage anger, no longer live with them.”

In fact, data from Statistics Korea showed last month that the number of households with just one or two members has surged notably over the past 15 years, to the point that such households made up almost 50 percent Korea’s family units in 2010.

Its latest report said that besides people putting off getting married and having kids, there was an increase in the number of homes in which a child lived with a single parent, reflecting the rising divorce rate.

“Such developments reflect the steady dissolution of conventional families in the country,” an official at the statistical office said.

Other pundits say that as modern life has become more difficult to manage, people have become less patient.

They say that after the Asian financial crisis in the late 1990s and the global financial crisis that began in 2008, the number of extreme stress factors has increased and people are less able to handle the stress. The list of problems people face today includes personal bankruptcies, dismissal, fraud and betrayal. Accordingly, an increasing number of people are saying, “That’s enough. I’ve had it.”

Kim Jong-woo, a professor of Oriental Medicine and Neuropsychiatry at Kyung Hee University Hospital at Gangdong, is one of those who supports this theory.

“In the past, anger would build up for seven to eight years on average before people began showing symptoms of hwabyung,” he said. “But today, as stressful, shocking incidents occur more often, that period has been reduced to months and that has given rise to a new term, acute hwabyung.”

Hwabyung, which is “anger illness” or “fire illness” in Korean, refers to a Korean culture-bound syndrome in which unresolved, long-standing discontent is manifested in the body by multiple symptoms and pains.

As a testament to how prevalent awareness of anger has become, a recent episode of “High Kick,” a popular sitcom, featured a homemaker diagnosed with anger management disorder. She was portrayed as suffering from stress, early menopause and panic attacks and often let out her anger by beating up her husband.

The episode resulted in a series of posts on the Web asking what “anger management disorder” is.

The concept, as well as its potential dangers to others and the society, may still seem unfamiliar to some Koreans. But there has been a rise in the number of calls for people to learn more about it and get their anger under control.

The biggest problem is that Koreans may well be filled with anger, but there are currently no state-certified anger management classes or specialists to which they can easily turn.

There is a so-called Anger Management Association, yet its programs are neither state-certified nor widely attended.

The association claims to have offered anger management classes to convicted criminals at probation centers on numerous occasions, but the Justice Ministry, which oversees probation centers and the programs there, asked the Korea JoongAng Daily to clarify that it has no such ties with the association nor does it have any plans to establish ties in the future.

So where should Koreans go to learn how to manage their anger?

Observers say that psychiatrists are the best option at the moment, despite the stigma attached to people who seek mental health counseling in Korea.

“It depends on the cause of their anger, but they should turn to psychotherapy sessions, counseling centers or mental health clinics,” said Shin Min-sup, a professor of Child Psychiatry at Seoul National University Children’s Hospital, whose patients include children with attention deficit hyperactivity disorder and adults with anger management issues.

Shin acknowledged that while a lot of study on anger has been done by Korean researchers, the availability of anger management programs is limited compared to that in other countries. She also acknowledged that most of the people who come to her do so not for preventative care, but for rehabilitation after something has already happened, including acts of violence. Kim of Kyung Hee University suggests that people, until they are able to seek help, should find a “refuge” of their own when they are stressed.

“You have to find your own ways to relieve stress and anger, whether it be chats with close friends, power walks or singing,” Kim says.