As part of their aggressive promotions amid a fast-growing market, distributors of foreign vehicles are increasingly dropping prices below what the cars cost in their home country, some by up to 30 percent.

And more price differences are being found in the small car segment as importers and distributors target young customers with less spending power and who are unlikely to have a family in tow.

When Mercedes-Benz launched its new B-Class on Monday, it priced the sports version of the hatchback at 42.5 million won ($37,640), 1.5 million won lower than it is in Germany.

“The headquarters considers Korea as a key market because of the explosive growth being seen among imported models,” said a spokeswoman at the company that imports Mercedes here. “As the B-Class is a compact, we hope to appeal to younger buyers.” 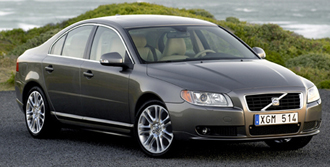 The free trade agreement between Korea and the European Union that took effect last August also reduced tariffs for many imports from the continent to help facilitate the price drops, she added.

However, most of the cheaper models tend to be high-volume sellers such as Volkswagen’s Golf 2.0 TDI hatchback. This is priced 14.3 million won lower in Korea than in Germany, marking a reduction of almost 30 percent. When VW’s new Scirocco coupe was launched in February it was also priced much lower than in its country of origin.

The strategy is to increase sales volume and market share at the expense of per-unit profit margin.

Mercedes’ B-Class is not the only model in its lineup that is more affordable in Korea. Its S-Class flagship sedan with full options is also cheaper, as is its full-option S500 BlueEfficiency, which retails for 197.5 million won in Germany and 173.6 million won here, according to the company.

As the competition gets fiercer among foreign brands, some of the weaker brands are trying to undercut their rivals by focusing on price competitiveness.

“The model sells for 61 million won but is priced at 57 million won in Korea,” said a Volvo Korea official. “Considering the stiff competition with Mercedes’ E-Class and the BMW 5-Series, we lowered the price for the Korean market.”

Audi’s A4 and A6 four-wheel-drive sedans are priced 10 percent to 20 percent lower in the country, respectively, than back home.

The value of the Korean currency has appreciated 10 percent against the U.S. dollar since the end of 2008, and the fact that many distributors have started paying in won instead of in euros has also made it possible to lower prices, the automakers said.