Inflation weighs on consumers, despite index

Inflation weighs on consumers, despite index 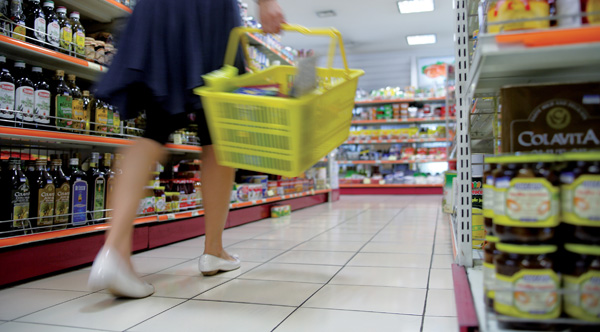 A lady does her grocery shopping at a discount store. While consumer inflation grew by its slowest on-year pace in 20 months to 2.6 percent in March, consumers complain that the reality in supermarkets is more burdensome. [JoongAng Ilbo]

An apparent slowdown in consumer prices is not being reflected in people’s weekly shopping bills, according to the man on the street, or more appropriately, the mother of two in the supermarket.

Consumer inflation rose 2.6 percent in March from a year earlier, slowing from a 3.1 percent gain in February and 3.4 percent advance in January. 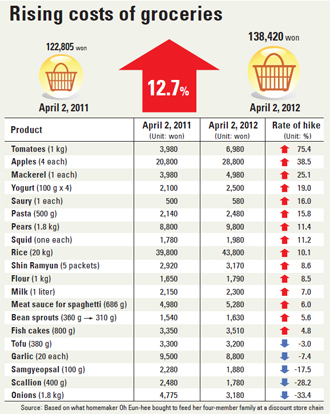 This year’s figures give the impression that Joe public is already better off this year than last, when inflation grew by an average 4.4 percent.

But many say this is misleading and complain of a disconnect between the official inflation index and the reality when they hit the grocery store or hypermarket, especially as the prices of many daily necessities have skyrocketed.

The Korea JoongAng Daily on Monday compared the prices from a year ago of 20 staple products that a typical homemaker, in this case Oh Eun-hee of Seoul, regularly buys at a large discount store.

Oh, 45, buys groceries once or twice a week to support a family of four.

“Things were tight before, but this year is even worse,” Oh said.

“I used to make a list of groceries before shopping to make sure I don’t splurge and waste money, but now even that is not enough.

“Now I head to whatever discount store is offering the best promotions on essential items. For example, if the store has milk on sale that week, I’ll go there.”

Fresh fruit, most of which is imported, and vegetables showed mixed results, according to Monday’s findings.

Apples were the worst offenders among staple foods, having shot up 75 percent on average in the space of a year, while tomatoes were up 38 percent. But other produce, such as scallions, onions and garlic, showed double-digit price drops due to increased production.

Prices of processed foods were also among those that have shot up the most over the last 12 months, with a five-bundle packet of Shin Ramyun climbing 8.6 percent from 2,920 won to 3,170 won. Pasta and fish cakes, popular among Korean children, went up 15.8 percent and 4.8 percent, respectively.

“The hike in prices of raw materials such as flour and sugar, coupled with more expensive packaging, has taken its toll on the cost of processed food in the grocery aisles,” said an employee at local discount store chain.

Milk and yogurt were also affected as dairy manufacturers last year ramped up their prices of white milk, citing the rising cost of animal feed as well as milk shortages triggered by a foot-and-mouth disease scare.

As food prices continue to rise, some companies have begun playing with the size of their packaged products and prices in a bid to retain profits while avoiding consumers’ ire.

Bean sprouts, a staple for the popular haejangguk, or “hangover soup,” are a good example of this.

“My children are growing up and they eat a lot these days, so I’m paying more for food than ever,” said Oh, who favors local produce for her husband, 16-year-old son and 12-year-old daughter.

“I feel frustrated, because while I don’t want to sacrifice what we eat, my husband’s salary hasn’t really gone up and food prices are rising relentlessly.”

The spike in consumer prices has forced more Koreans to hunt for bargains and cut back on overall spending, according to a March poll by the Korea Chamber of Commerce and Industry.

The chamber polled 500 households and found that 94 percent of respondents were more price-conscious now than they were 12 months earlier.

“The survey shows that consumers have become more sensitive to prices,” said Yeom Min-seon, a researcher at the chamber.

Yeom said Oh’s complaints are commonly heard these days and that 70.6 percent of the respondents said the hike in basic commodities had outpaced their salary raises.

“Because the prices of basic essentials have spiked, people feel more burdened than is indicated by the official index,” said Ahn Hyeong-jun, an official at Statistics Korea.

“The cost of goods shot up significantly last year, so prices should rise less this year.”