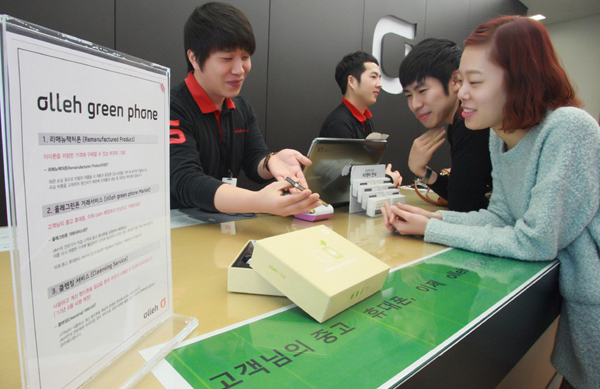 Customers shop for used handsets at one of 250 Olleh stores nationwide. KT launched its “Olleh Green Phone” service on March 22, enabling its customers to trade in used phones. Provided by KT


Stores operated by mobile service carriers SK Telecom and KT are now letting people part-exchange their used handsets for new or other second-hand models, or trade them for a partial cash refund.

SK Telecom started the trend eight months ago, and its industry rival KT followed suit on March 22 by launching a marketplace for used phones under the catchphrase “Olleh Green Phone.”

The service makes it possible for customers to buy and sell iPhones and other handsets at around 250 stores nationwide under the Olleh brand. They can also do so online at www.olleh.com, but the advantage of making a personal visit is that owners can have the value of their handset assessed immediately while also browsing through the used phones on display.

However, KT’s new service comes with a number of restrictions: The seller must be a KT mobile service subscriber and the handset they aim to trade must also be one that was originally marketed exclusively for KT.

Over a dozen used feature phones are available in addition to the remanufactured iPhone 4, which Apple enthusiasts can trade their iPhone 3GS phones for. Previously, KT was only buying iPhones, but now it also accepts another 15 smartphone models.

“Through the Olleh Green Phone service, people can reclaim some of the value of their used handsets and buy expensive smartphones at a cheaper price,” said Pyo Hyun-myung, president of KT’s mobile business unit, adding that the move is one of a number of green initiatives aimed at conserving materials.

“We intend to unveil a series of eco-friendly services that will contribute to both the environment and society,” he said.

People who buy a new handset with an SK mobile plan may get a discount corresponding to the assessed value of their old phone, as long as the latter is at least six months old and was also originally bought with an SK subscription plan.

Customers can also ship their phone to SK Telecom, which will inform them within a week what discount they are entitled to, from 10,000 won to 405,000 won.

The company is even buying and reselling old models that date back to 2002, according to SK Telecom spokesman Kim Dae-woong.

“Let’s say your old phone is valued at 200,000 won and you want to buy a new smartphone,” he said. “If your monthly mobile fee for the new handset works out at 60,000 won, you will be exempt from paying this sum for three months.” 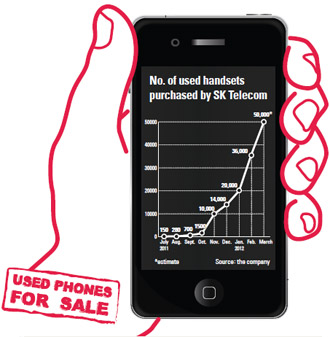 Those hoping to buy used phones at discount prices may shop online at www.tsmartshop.co.kr, but offline stores have yet to open. Kim said that existing SK Telecom stores will begin running the service by the end of this month at the earliest.

He said shoppers will be able to buy used iPhones and some Galaxy smartphones at half their original price.

To keep pace with expected demand, SK has been buying used handsets like there is no tomorrow. It purchased a measly 150 units in the first month, but this figure is estimated to have leapt past 50,000 in March, the company said.

Some are resold in Korea, but many are repackaged and exported overseas, mostly to underdeveloped Asian countries.

LG U+, the nation’s No. 3 carrier, has no plans to follow in its rivals’ footsteps and trade in used phones just yet, it said.

While the new system has already begun, a kink that has yet to be ironed out is how exactly monthly payment plans for used handsets with mobile carriers will be decided.

Traditionally, people who purchase new handsets are entitled to a fixed monthly discount if they subscribe to the same mobile service for two years or longer. Instead of buying a new phone with cash or credit cards, Koreans tend to rely on monthly installment plans stretched over the subscription period and get a certain amount deducted from their bill every month. But those buying used handsets are not yet entitled to any such discounts.

The Korea Communications Commission said last year it would encourage carriers to come up with mobile subscription plans specifically for used phone buyers.

KT said it will introduce the plan by the first half of this year, while SK has yet to come up with a detailed plan.