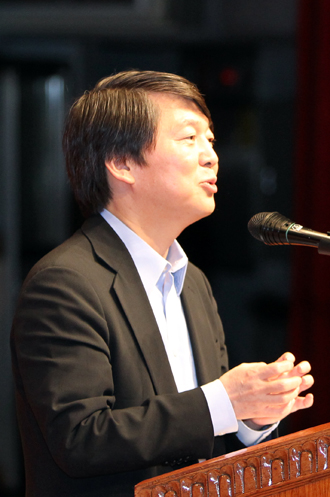 Ahn Cheol-soo, who liberals hope will run for president in December, told Korean college students to use their votes wisely in next week’s general election.

Ahn, the dean of the Graduate School of Convergence Science and Technology at Seoul National University, gave a lecture yesterday at Kyungpook National University in Daegu, a southeastern city of Seoul, which is a stronghold of the ruling Saenuri Party.

The popular software mogul recently broke his silence on whether he will enter politics, saying he “can bear even politics” if he was able to make positive changes in society.

But he continues to be mum on whether he will run in December’s presidential election.

The auditorium, in which Ahn gave his second lecture to students in two days, was jammed.

“I came to give this lecture at such a sensitive time, ahead of the general election,” Ahn said. “I hope you to think the sincerity of who indeed will ponder a solution for us, with a will of implementation.”

“I urge you to think of the sincerity when you choose a candidate in the coming election.”

Ahn said it was disappointing to see politicians slinging mud at each other all the time.

“I know that pointing out rivals’ faults is part of a campaign,” Ahn said.

“But I think the more important thing is that [politicians] should explain their philosophies,” he said, “and compete with each other based on their manifestos.”

Ahn is renowned for his success in starting a mid-sized antivirus software company called Ahn Lab, giving up his previous job as a doctor. Based on his experience as an entrepreneur, he stressed the importance of developing small- and medium-sized companies for the Korean economy.

“I think now the government should shift its focus from overall economic growth to creating more jobs,” Ahn said.

“The government should give more tax benefits to new companies if they create jobs,” he said, “regardless of the amount of their capital investment.”

On Tuesday, Ahn visited Gwangju, South Jeolla, a stronghold of the liberal opposition parties, and delivered a lecture at Chonnam National University. He urged students to exercise their votes to prevent particular interest groups from dominating politics.

“I will give you some guidelines,” he said.

“First, it seems to be right to choose people who think of national interests first, not their party’s ideological basis,” he said. “Second, politicians talking about the future, not the past, are the right ones.

“Third, you should choose warmhearted people, moderate people. Last, judge a candidate as an individual, not on his or her party or political faction.”

Ahn said in a lecture at Seoul National University on March 27, “If I participate [in politics], I won’t abandon the values of communities by being biased to the ideology of a certain political arena. The conservatives and liberals shouldn’t be enemies, but be complementary.”

He said he would take a “third way” to run in an election.