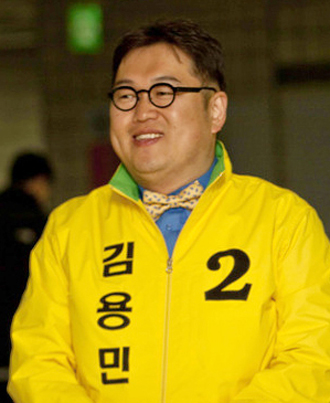 The ruling Saenuri Party yesterday questioned the integrity of the opposition parties after they backed a candidate in this month’s general election who is known for raunchy humor, gross language and sexually cruel remarks.

Kim Yong-min, a co-host of the popular political liberal podcast “Naneun Ggomsuda” (“I’m a Petty-Minded Creep”), is the consolidated candidate for the liberal alliance of the Democratic United Party and the Unified Progressive Party in northern Seoul’s Nowon A District.

After revelations that Kim made a series of sexually outrageous remarks in an Internet radio program in 2004 about officials in the administration of former U.S. President George W. Bush, the Saenuri Party condemned the liberal leaders for nominating Kim.

“Kim doesn’t deserve to ask for votes from the voters,” said Representative Cho Yoon-sun, spokeswoman of the conservative ruling party’s campaign committee, saying he should withdraw from the race.

On the 2004 Internet radio program, Kim suggested carrying out terrorist attacks in the United States. He said Yoo Yeong-cheol, a serial rapist and killer, should be released to kill Bush and then-U.S. Secretary of Defense Donald Rumsfeld. He said Yoo should rape and kill then-National Security Adviser Condoleezza Rice.

“We would also like to ask DUP Chairwoman Han Myeong-sook and UPP leaders Lee Jung-hee, Rhyu Si-min and Sim Sang-jeong which parts of Kim’s remarks they agree with and which led them to nominate him,” Cho said.

A YouTube video posted on Sunday revisited some of Kim’s past remarks, prompting rage from women’s rights groups.

“We want to ask the DUP and the UPP why they recruited such a candidate and nominated him,” Cho said.

Nowon A District is the former constituency of Chung Bong-ju, another co-host of the show, who was convicted of spreading false rumors about President Lee Myung-bak when Lee was running for president in 2007.

The conservative minority Liberty Forward Party also attacked Kim. “We wonder not only about his qualifications to become a lawmaker, but also his basic personality,” said the party’s deputy spokesman, Lee Gi-ju. “Foul language will only fuel public distrust of politicians, and Kim must remember that words can boomerang back.”

As the criticism snowballed, Kim issued an apology yesterday, but did not stand down from running. Kim posted a video of his apology on his blog.