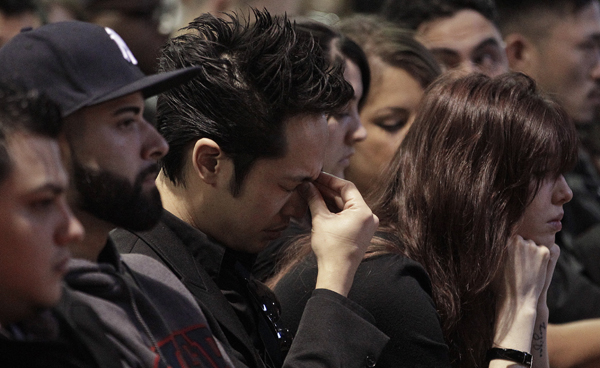 
Two of the seven victims shot and killed by the Korean-American nursing student who went on an execution-style shooting rampage on a campus in Oakland, California, were of Korean descent.

Six women and one man were killed while three were wounded when a gunman, 43-year-old One L. Goh, entered a classroom in the small Christian college Oikos University in Oakland and opened fire Monday morning. It is the deadliest shooting spree on a U.S. college campus since the Virginia Tech massacre in April 2007, when a Korean-born student killed 32 people before turning the gun on himself.

The two Korean victims killed in the shooting were confirmed to be 21-year-old Lydia Sim, whose Korean name is Sim Hyeon-ju, and 23-year-old Grace Kim, whose Korean name is Kim Eun-hea - both U.S. citizens according to the Ministry of Foreign Affairs and Trade. The other victims were from various countries and between the ages of 21 to 41, including a Filipino female receptionist of the school and nursing students from Nepal, Tibet and Nigeria.

Goh was a nursing student at the school but was expelled in January for “behavioral problems” and had “anger management” issues, according to Oakland Police. Police said his peers made fun of him for his poor English, and he was embittered towards the school and its administration because he felt disrespected.

His 72-year-old father told a JoongAng Ilbo reporter, “My son saw other students cheating on a test and told the professor but was ignored.” After that, he was ostracized by his classmates and had hard time keeping up in school. He issued his deepest apologies to the victims’ families.

Authorities say that he was angry because an administrator would not refund his tuition money. He bought a gun legally and allegedly planned the shooting for weeks, police said.

However, Oakland Police indicated that Goh’s victims on the day of the shooting appeared to be random and not his alleged tormenters.

Goh was also struggling with significant debt and had a run-in with the Internal Revenue Service according to court records. He appears to have no steady income.

His Korean name before naturalization as a U.S. citizen is Goh Su-nam and not Goh One-il as reported earlier. Goh’s family immigrated to the United States in 1994, and he became a naturalized citizen in 2000. Previously, the Oakland police stated it was possible that he might be a permanent resident. For nearly a decade, Goh lived in Virginia.

Last year, he lost two family members: a mother and a brother who was a U.S. Army soldier who died in a car accident on duty.

Police and witnesses said that Goh took a hostage when entering the school and directed students to line up against the wall. Oakland Police Department Chief Howard Jordan stated at a news conference that he went to the school “with the intent of locating an administrator and she was not there.”

Goh began shooting “systematically and randomly” with a handgun before the students were lined up. Some students in other classrooms locked themselves in the room to avoid the gunman while others escaped the building. The shooting lasted only minutes before the gunman drove off in a car after taking the key from a victim. The police were notified of the shooting at 10:33 a.m. local time, and arrived on the scene within 10 minutes.

About one-and-a-half hours later, Goh surrendered himself without struggle to police at a grocery store three miles away from the campus.

Jordan said to CNN, “During investigation, he was very cooperative” but “does not appear remorseful.”

Police are searching for Goh’s firearm, which was apparently tossed in the Oakland estuary leading into San Leandro Bay after he fled the shooting scene. They believe the weapon to be a semiautomatic pistol based on ballistic evidence. The three wounded victims had all been released from a local hospital on Tuesday. A memorial service for those killed was held at Oikos University yesterday. Goh will be summoned to courts today.