Official play of the Korea Baseball Organization starts tomorrow. Over the six-month season, each team will play 133 games under the name of the 2012 Paldo Korea Professional Baseball League.

A total of four games are scheduled to kick off the season. Two Seoul-based clubs - Doosan Bears and Nexen Heroes - will begin their season at Jamsil Baseball Stadium in southern Seoul, while defending champion Samsung Lions hosts the LG Twins in Daegu. Both games start at 2 p.m.

Last season’s runner-up SK Wyverns take on the Kia Tigers at Munhak Baseball Stadium in Incheon at 2 p.m., and in the southern port city of Busan, the Lotte Giants and Hanwha Eagles square off at 1:55 p.m.

The KBO, which marks its 31st year, faced one of the most shameful and disappointing periods in its history last month as two active pitchers were indicted for match-fixing. While there was speculation that more players might be involved, the investigation has been officially closed by prosecutors.

The league apologized for the incident and promised to prevent similar cases in the future. Now, it is trying to restore its fallen image with more exciting baseball.

However, despite the match-fixing scandal, the popularity of baseball seems to be unaffected. This year, fans broke the preseason attendance record by setting the most attendance in a single day (four games, 57,508 fans) as well as attendance on opening weekend (seven games, 101,351 fans). 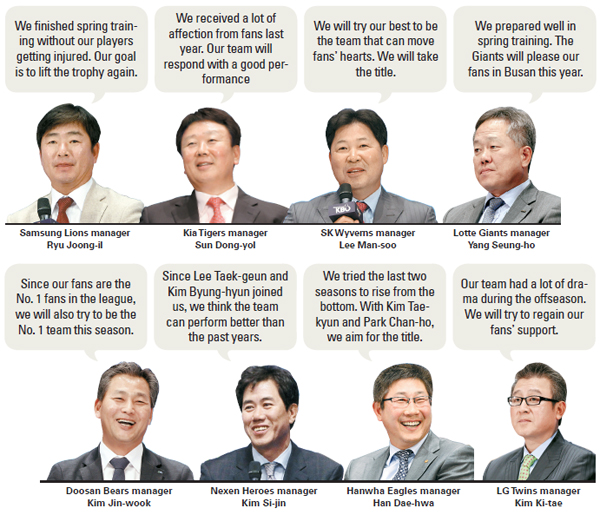 The most important thing fans should notice is the change of game times.

However, this year, including on opening weekend, teams will begin their action at 2 p.m. every Sunday and on holidays until May 6, when the games go back to 5 p.m. on weekends.

The evaluation of most valuable player, Rookie of the Year, and best sportsmanship will now be based on the performance of the pennant race. The voting for these individual awards will occur after the regular season, and the ballot-counting will take place after the Korea Series.

Previously, voting for these awards was held after the Korea Series, and there was controversy that a player’s postseason performance influenced his overall performance in the regular season.

Meanwhile, this year’s All-Star Game will be at the Daejeon Baseball Stadium, home of the Hanwha Eagles, for the first time since 2003. The stadium has been going through renovation this winter and will be able to accommodate 14,000 fans.

Star players back from overseas

What drives the anticipation this season is the star players who have wrapped up their overseas baseball careers and are returning to their home country.

Former Major League Baseball All-Star pitchers Park Chan-ho and Kim Byung-hyun will make their KBO debuts after signing with the Eagles and Heroes, respectively, while sluggers Lee Seung-yeop and Kim Tae-kyun have returned to their old teams - Lions and Eagles - after playing in the Nippon Professional Baseball League in Japan.

Park, who has 124 wins in the MLB, the most by an Asian pitcher, will make his KBO debut 18 years since he left Korea after signing with the Los Angeles Dodgers in 1994.

Park, who was with the Orix Buffaloes last year in Japan, didn’t perform well in the preseason, giving up 12 runs in 8.1 innings with a 12.96 ERA. But Park said he is still adjusting to find his rhythm and pitching balance. The Eagles placed him as a starting pitcher for the season. The 38-year-old is past his prime, but watching him pitch should be entertaining.

Kim, the only Korean who has a World Series ring, will also pitch in the KBO for the first time. While he was with Sungkyunkwan University, Kim left for the MLB in 1999 after signing with the Arizona Diamondbacks.

The 33-year-old submariner briefly featured during the preseason, pitching only 1.2 innings. The Heroes said Kim is still working on his form since he hasn’t pitched in competitive games for a while, but is expected to make his debut in late April or early May.

While these two Major Leaguers will slowly bring up their game, Lee, who has the Asia home run record in a single season with 56, created a buzz with an impressive performance during the preseason.

The 36-year-old lefty slugger, who will be back with the Lions after spending eight seasons with the Chiba Lotte Marines, Yomiuri Giants and Orix Buffaloes in the NPB, had a .429 batting average with two home runs and seven RBI in 11 exhibition games.

Lee could become the KBO’s all-time leader in home runs this season. He has bagged 324 home runs in his career so far, 27 behind former Lions legend Yang Jun-hyuk.

Eagles slugger Kim Tae-kyun has also hinted that he could have a massive season. The 30-year-old, who is coming back to the KBO after spending two seasons in the NPB, had a .400 batting average with two home runs and eight RBI in the preseason. The 2008 KBO home-run king only struck out twice in his 29 at-bats.

Unlike the three celebrity players above, Kim is at the peak of his baseball career and needs to actually contribute solid numbers for the team. That is why the Eagles are paying him 1.5 billion won ($1.3 million) this year, making him the highest-earning player in Korean professional sports history.

Will the Lions roar again?

The Samsung Lions had their best season in franchise history last year. They claimed regular season titles, the Korea Series and the Asia Series to achieve a “triple crown.” The Daegu-based team didn’t perform well in the preseason, coming in only sixth, but most pundits are saying they are still the favorite to lift the trophy.

In fact, at the Media Day event, managers from five clubs said they expect the Lions to claim the title this season. The recent survey from Gallup Korea, who conducted its survey of more than 1,500 baseball fans, also showed that the Lions are No. 1 among fans after receiving 21 percent support. Second place were the Kia Tigers at 7.7 percent.

The core members of the Lions are still intact. The team is considered to have the best pitching power, thanks to a strong bullpen that had a 2.44 ERA last season. In particular, the presence of closer Oh Seung-hwan, who had 47 saves last season, will seal the deal whenever the team gets ahead. The 30-year-old is expected to be the KBO’s all-time leader in saves this season. He is only 15 saves behind retired Twins pitcher Kim Yong-soo, who has 227 total saves.

The team, led by manager Ryu Joong-il, will also see better offense this season after veteran Lee joined the roster. He will boost the offense with Choi Hyung-woo, last year’s home run king.

The 10-time KBO champion Kia Tigers and the SK Wyverns, who claimed three Korea Series title and finished second twice in the last five years, are considered to be a contestant against the Lions, but experts are saying the speculation for this season is hard to predict since all teams have upgraded their roster during the offseason.

Three clubs will start their season with a new manager.

The Gwangju-based Tigers appointed Sun Dong-yol, who previously won two titles with the Lions in 2005 and 2006, as their skipper. The team is expected to perform better in pitching under his guidance. Sun was a legendary pitcher in his playing days. The 2009 champions also have last season’s MVP Yoon Suk-min, who ranked first in wins, ERA and strikeouts.

The Doosan Bears promoted their assistant coach Kim Jin-wook as their manager, while its city rival LG Twins named Kim Ki-tae as their new manager. The Twins had a difficult time during their offseason after their starting pitchers - Park Hyun-jun and Kim Seong-hyun - were indicted for match-fixing, and are trying to recover from the painful memory.

The Lotte Giants, who was picked as the most popular baseball club in the KBO according to Gallup Korea, lost their slugger Lee Dae-ho to the Orix Buffaloes of Japan. Filling his void will be critical.

The team brought veteran pitchers Chong Tae-hyun and Lee Seung-ho from the Wyverns and beefed up their bullpen. But since the two are recovering from injury, the key for the Giants will be how long they will stay in good shape. The team finished last place in the preseason.

There are similar worries for the Wyverns who finished first in the preseason. The team’s two starting pitchers Kim Kwang-hyun and Song Eun-beom are out with injuries until the end of April. The Incheon-based team hopes catcher Cho In-sung, who signed with the team as a free agent after playing for the Twins for 14 years, will bring experience and offensive power to the squad.

Last season’s two bottom feeders, the Eagles and the Heroes, are ready to bounce back this season after signing top players. The two teams showed progress in the preseason as the Eagles finished third and the Heroes ended in second place.

The Eagles will now have a formidable offensive lineup after signing Kim. Their hitting trio - Jang Sung-ho, Kim and Choi Jin-hang - are considered to be top in the league along with the Lions. The team signed free agent Song Shin-young to boost its bullpen, while lefty ace Ryu Hyun-jin is ready to dominate the league after showing a strong performance in the preseason.