FTC frets that tariff cuts not shown in prices

FTC frets that tariff cuts not shown in prices 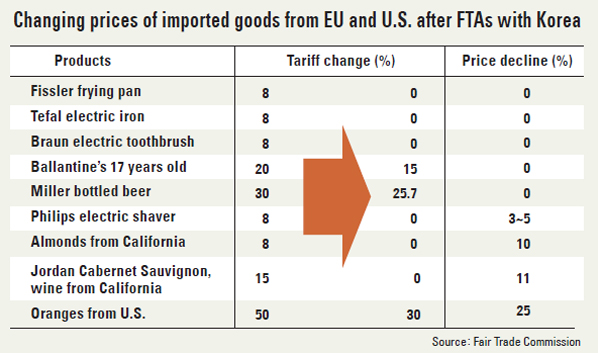 Prices of imported goods have either stayed the same or edged down slightly despite recent free trade agreements with major trading powers lifting tariffs on home appliances such as kitchenware and alcoholic beverages, the Fair Trade Commission said yesterday.

Kim Dong-soo, the head of Korea’s antitrust watchdog, visited Shinsegae Department Store in Seocho-dong, southern Seoul, yesterday to check if imported goods have become more affordable as planned since the implementation of the recent FTAs with the European Union last July and the United States two weeks ago.

“The lifted tariffs should result in the prices of imported goods falling so that ultimately consumers can enjoy a better quality of life,” said Kim.

French kitchenware label Tefal has kept the retail price of its electric iron unchanged in the last nine months. An electric toothbrush by German home appliance label Braun and products by German kitchenware label Fissler also cost the same despite the removal of 8 percent tariffs.

Meanwhile, whiskey from the UK is also proving resistant to FTA-inspired price cuts. 17-year-old Ballantine’s Scotch whiskey is still selling for 145,000 won ($129) a bottle even though the import tariff was lowered from 20 percent to 15 percent this year. The tariff will be fully removed within the next three years.

An electric razor by Dutch home appliance maker Philips and a refrigerator by KitchenAid of the U.S. were both found to have dropped by 5 percent, although this still failed to match the elimination of an 8 percent tariff.

In contrast, many imported agricultural items had benefited from the trade deals, with almonds and oranges from the U.S. immediately dropping 10 percent and 25 percent, respectively.

The commission said it will regularly monitor the prices of imported goods and investigate those it believes should have been lowered but which have seen little or no change. The FTC will cooperate with other consumer rights organizations to look into the product distribution system that might be unfairly hindering price cuts, it added.

Its analysis of electric irons will be released this month, and its probe into electric toothbrushes, electric razors and frying pans is due out in May.

It will also do a weekly price check on 13 foodstuffs, daily necessities and home appliances including oranges, cherries, grape juice, beer, shampoo and refrigerators, it said.

“If there is any unlawful trade action spotted during the course of distributing the tariff-free products, the commission will take serious measures to fix the problems,” said Kim of the FTC.