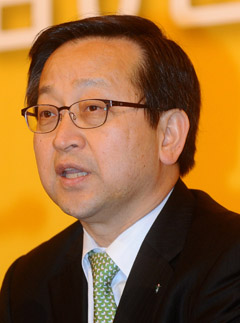 Kim Jong-jun, the new President of Hana Bank, once again stressed that Korea Exchange Bank, its new acquisition, is not a competitor but a companion.

“Hana and KEB are compatriots whose primary goal is joint growth,” Kim said at his first press briefing held in Seoul yesterday.

“We will join forces and compete with others instead of competing between ourselves.”

Kim added that instead of concentrating on developing financial products that are distinctively different from those offered by KEB, Hana will study outstanding products developed by KEB while passing along know-how on its own products to the newly acquired KEB.

“For the time being, KEB will be operating independently [from Hana] but the relationships between two will be more focused on complementing one another,” Kim said.

“Hana and KEB are good banks but they are not the best,” he added. “But when the two join forces as one, it could become the best.”

Hana Bank and its parent company Hana Financial Group have been cautious in its new relationship with KEB, which it fully acquired after a long awaited approval from the government earlier this year.

After the financial regulator’s final approval was made, Hana’s top management swiftly met with the KEB labor union that opposed the merger and agreed on five years of independent management.

“Eventually, in the distant future, the banks’ names will have to be joined into one,” said a Hana official. “However, until then we [Hana] are trying to not offend KEB.”

Kim also said that in the long-run he will narrow the wage gap between Hana Bank and KEB. In a recent study, KEB employees were found to receive the highest pay in the banking industry on average.

“It is difficult to solve the problem [of wage differences] immediately since we don’t have any data showing how the wage payment systems between the two banks are different,” Kim said. “However we could think of creating a new wage system since the difference could become a problem once the two banks are joined into one.”

Additionally Kim raised the possibility of readjusting the overlapping branches of the banks for efficiency.

“Hana Bank has 653 branches while KEB has 357,” Kim said. “For now it is not appropriate to further increase the number of branches. Therefore the total sum of branches will have to be readjusted.”