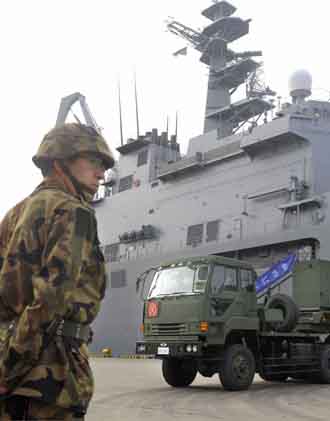 A Japan Maritime Self-Defense Force truck loaded with Patriot Advanced Capability-3 (PAC-3) missiles arrives at Ishigaki port, southern Japan, yesterday. Japan plans to shoot down North Korea’s missile if it threatens it and has deployed Aegis radar-equipped destroyers carrying Standard Missile-3 interceptors in the East Sea and the East China Sea, and Patriot Advanced Capability-3 ground-based interceptors on some of Japan’s southern islands and in the Tokyo metropolitan area. [REUTERS/YONHAP]

The United States rebuffed an invitation from North Korea to send observers to watch a satellite launch scheduled for mid-April and encouraged other countries to do the same.

North Korea has invited space agencies of eight countries to the launch site in Tongchang-ri in the northwestern region of the country, to show them the launch of a long-range rocket that has been condemned worldwide, Kyodo News reported on Wednesday.

“The United States will not send any observers,” a State Department official told Yonhap News Agency on Wednesday on the condition of anonymity. “As we have consistently stated, North Korea’s planned missile launch would be a clear violation of UN Security Council resolutions 1718 and 1874, and a threat to regional peace and security.”

The other invited countries should follow suit, the official said.

“We call on the international community to abstain from taking any actions, such as sending observers, that might be seen as endorsing a launch that would be in blatant defiance of the DPRK’s international obligations and commitments,” the official said.

The North’s official Korean Committee of Space Technology said in the invitation that the invited observers “can watch the blast-off of the satellite live and have a dialogue with local experts,” the TV Asahi reported on Tuesday.

Although the North argues the rocket is a “working satellite” and part of its sovereign right of peaceful development in space, the international community says it’s a disguised test of a weaponized missile.

Of the eight invitees, the U.S. National Aeronautics and Space Administration, the Japan Aerospace Exploration Agency, the European Space Agency and the Russian Federal Space Agency have declined the invitation so far, Yonhap said.

Responses from Iran, India and an unknown country weren’t reported yet.

Tensions are mounting on the Korean Peninsula ahead of the North’s launch. The Chosun Sinbo, the mouthpiece of an association of pro-North Korean residents in Japan, implied in an editorial Wednesday that the regime could conduct a third nuclear test if the international community imposes additional economic sanctions after the satellite launch.

“The U.S. remarks and actions to provoke a quarrel means setting the clock back to post-April [2009],” the editorial said. “In May 2009, the DPRK conducted a second nuclear test as a self-defensive measure after the UN Security Council’s sanctions.”

“The recent message is their typical way of threatening the international community,” a South Korean government official said on the condition of anonymity, “by linking a missile launch with a nuclear test.”