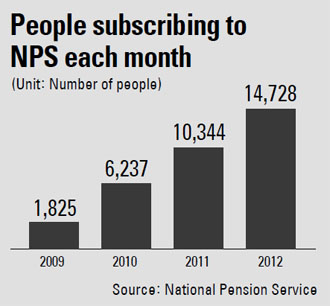 One of the major concerns Suh, a 43-year-old homemaker, has been preparing for her and her husband’s golden years.
When Suh worked in an office, she was obliged to pay into the National Pension Service for her retirement years. But when she quit in 2009, those contributions stopped.

Last year, Suh discovered that she was allowed to voluntarily pay into the pension fund to make her eventual retirement payments larger. She started doing so.

Like Suh, more Korean women are voluntarily subscribing to the country’s national pension service, government data showed yesterday. According to the NPS, Korea’s state-run pension fund, 44,183 Koreans subscribed to pay monthly pension fees in the first three months of this year, boosting the total number to 196,406. The average number of people who sign up every month has gone from 1,825 in 2009 to 14,728 this year.

Voluntary subscribers include people who paid into the scheme in the past but don’t work now. Many are housewives who once worked but not for the 10 years that are required to receive monthly pension payments in their senior years. Students and soldiers under 27 years old are also eligible to subscribe on their own.

“People in their 40s and 50s seem to be in a hurry to prepare for their twilight years,” said Han Ki-sung, an NPS official.

“There are many female employees in Korea that are forced to quit work because they have children and other reasons,” Han said. “And many of them are willing to continue paying monthly pension fees - this time on their own - to prepare for their senior stage in life.”

According to NPS data, more than 70 percent of the new subscribers last year had previously subscribed to the service while they were employed by a company.

The NPS said Koreans are also preparing for longer lives. Based on Statistics Korea data, Koreans’ life expectancy at birth is forecast to reach an average of 83.1 years in 2030.

“One of the ultimate goals for the NPS is to secure as many subscribers as possible so that we create a social safety net for people in an aging society,” said NPS Chairman Jun Kwang-woo.