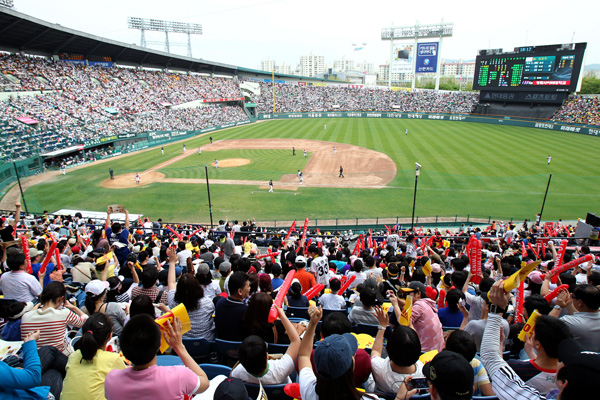 The view from Jamsil Baseball Stadium’s first base infield seats. Fans can cheer with balloon sticks and show placards following the lead from cheerleaders. [JoongAng Ilbo]

With baseball stadiums upgrading their facilities and offering more interactive events for fans, there has never been a better time to take friends and family out to a ball game.

The Korea Baseball Organization finally begins its six-month season of 532 games today under the name Paldo Professional Baseball, after a deal signed with a local firm.

The eight clubs have been working hard during the offseason in preparation for this day. In addition to getting their athletes in shape to play more exciting baseball, team management has also focused on renovating stadium facilities to make fans more comfortable. All four stadiums with games today have new grounds, while other ballparks around the country have improved their stadium seating.

Three of the stadiums - Jamil, Sajik and Munhak - are cleaning up their facilities after asbestos was detected in the sand last year.

Just like last year, the games will start at 6:30 p.m. on weekdays and at 5 p.m. on weekends and holidays. But this weekend’s games and all games played until May 6 will begin at 2 p.m. on Sundays and holidays. There are no games on Mondays.

Fans can always buy tickets on site, but the recent surge in baseball’s popularity signals that it might be a good idea to buy tickets before heading out to the stadium.

To get tickets in advance, visit the Web sites of individual clubs or go to ticketlink.co.kr. Fans can also book via phone (1588-7890). Ticket prices vary according to the team and seating location. Tickets are usually cheaper for weekday games, but weekend prices usually apply for Friday games.

Generally speaking, the seats in front of the cheerleaders are the most popular, since the atmosphere there is always charged with energy. Those who want to enjoy the game in a quiet and comfortable place could opt for skybox seating, which, as at most stadiums, usually comes with sky high prices.

But before you book your tickets, know that each stadium has its own ideal spots for watching the game.

At Jamsil Baseball Stadium, the home of the Doosan Bears and LG Twins, in southern Seoul, the best seats are behind home plate, which is true for most baseball stadiums. 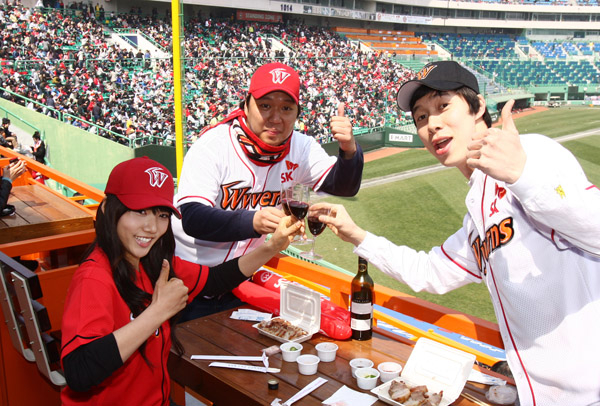 SK Wyverns fans enjoy a toast in the BBQ Zone at Munhak Baseball Stadium in Incheon.

Couples may want to sit in the Hot Dog Zone, so named because these seats come with tables to facilitate snacking. Located between the box seats and the blue seats in the infield, seats here cost 40,000 won ($35.4).

The newest baseball stadium in the KBO is Munhak Baseball Stadium, home of the SK Wyverns. Opened in 2002, the stadium has various seating options and facilities comparable to MLB stadiums.

In the Green Zone, located around the edge of the outfield, fans can sit on the grass and picnic during the game. Seating is available on a first-come, first-serve basis and costs 8,000 won for adults.

Over in the BBQ Zone, fans can bring their own meat and cook it over the grills scattered around the area. This area is extremely popular, so prices have been raised since last year. A place for four now costs 72,000 won, up 12,000 won from last year.

The stadium also has a Party Deck, which opened last year, for groups of four to eight people. Reservations for these seats are highly recommended.

True baseball maniacs should head to the seats on the fourth or fifth floor, the highest level among any baseball stadiums in Korea. Fans have said that these seats provide an overview of the action as well as good nighttime views for stargazing.

At Sajik Baseball Stadium, there’s not a quiet seat in the house, as zealous Lotte Giants fans gather here to sing their hearts out in support of their team. Jerry Royster, the Giants’ manager from 2008 to 2010, once said the stadium is the “world’s biggest noraebang [singing room].”

The stadium is also the nation’s largest, with space for 28,500 fans.

Since it is impossible to avoid the noise of enthusiastic Giants supporters, the best thing to do is join them. And the best place to get in on the action is in the infield seats near first base. This is also where the cheerleaders perform, meaning it is also the best place to sit if you want a chance to appear on television.

To feel closer to the game, sit in one of the two Exciting Zones, which are located on the first and third baselines. But because those who sit here face the risk of getting hit by stray foul balls, children are not allowed. Seats cost 30,000 won.

New this season is the Premier Zone, located behind home plate and offering a view of the whole stadium. Adults pay 35,000 to sit here. 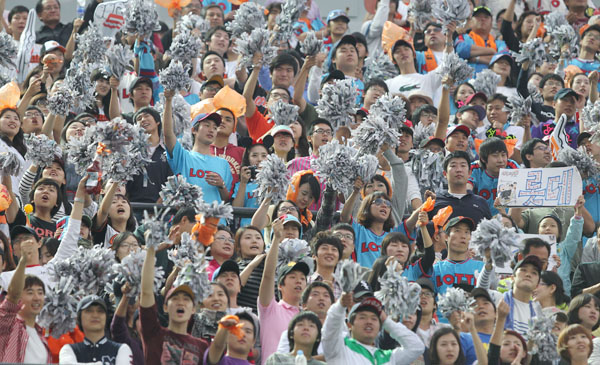 Lotte Giants fans support their team by wearing newspapers and plastic bags on their heads at Sajik Baseball Stadium in Busan. Fans use the bags to clean up trash after the game. [JoongAng Ilbo]

At Daegu Baseball Stadium, home of the defending champion Samsung Lions, the best seats are in the third base infield section nears the center box seats. This section is right above the Lions’ dugout, so it’s a good place to watch the players.

The Mokdong Baseball Stadium in western Seoul, home of the Nexen Heroes, doesn’t have seats behind center field because that is reserved for the bullpen. The best seats here are behind home plate. Tigers fans might have to wait until April 27 to visit Gwangju Baseball Stadium because it is currently in the final stages of a project to change the artificial turf to natural grass. When it opens again, the seats in front of the cheerleaders will be the ones to get. Eagles fans will have to wait until May to go to Daejeon Baseball Stadium, where this year’s All-Star Game will be held on July 21. The stadium is currently undergoing a 13 billion-won renovation that will extend the stadium to three stories from two, with a total of 14,000 seats instead of the previous 10,500. There will also be a skybox and two Exiting Zones, similar to those at Sajik stadium.

Until the Daejeon stadium opens, the Eagles will have to play at Cheongju Baseball Stadium, the smallest KBO stadium with only 7,500 seats.


What to wear, what to eat

Now that you know where to sit, it’s time to deck yourself out and get something to eat.

Though there is no dress code for baseball fans in Korea, the ideal outfit for everyone is a baseball cap and your home team’s jersey. If you don’t have a jersey, you can always pick one up at the stadium - most are sold near the stadium entrance. Prices vary, but the cost is usually 25,000 won for a plain jersey and 80,000 won for one with a player’s name.

Even if you’re on a diet, you won’t want to miss out on the food. Regardless of where you go, one of the most popular snack combinations is something Koreans call chi-maek, which stands for chicken, and maekju (beer). Last year, it was reported that 1,800 500-milliliter cups of beer were sold per day at Jamsil Stadium.
But each stadium has its own specialty, and all are worth a try.

At Sajik Stadium, the specialty is chungmu kimbab, which is sold behind the first base entrance for around 4,000 won. The mini rice and seaweed rolls can be eaten alone or with a side of kimchi and spicy squid, sold separately. Samgyupsal (pork belly) is also sold near the stadium and comes in a small box. Fans can also ask for food delivery during the game.

At Munhak Stadium, those who are lucky enough to get seats in the BBQ Zone usually bring their own meat to grill. People seated outside of the zone can sample the dakgangjung (sweet, seasoned fried chicken), a specialty in Incheon, located 40 kilometers (24.9 miles) west of Seoul. The snack is a well-known specialty in the nearby Chinatown and is usually around 15,000 won per box.

In Daegu, fans should pick up some napjak mandu (flat dumplings) near the stadium before heading inside, and in Gwangju, the pork feet and 20-centimeter sausages are the most popular snacks.

In Jamsil, triangle gimbab (rice roll) and tteokbokki (spicy rice cakes) are the foods worth trying.

While Korean snacks are standard at these stadiums, Mokdong features a more Western menu with hot dogs, hamburgers and nachos.

Now that you’ve got your jersey and have your food, it’s time to enjoy the game.

Korea’s baseball culture is loud and singing is ever-present, so be prepared to join in. Each club and some star players have their own songs, most of which have melodies borrowed from K-pop or American pop, and lyrics about the club or player.

If singing is not your thing, you can also make plenty of noise with thundersticks, the most common cheering paraphernalia at Korean baseball stadiums. Clubs make and sell their own thundersticks with color schemes that match team uniforms. Thunderstick designs vary from club to club. The Bears, for example, have thundersticks in the shape of their mascot. Avid baseball fans are free to bring signs or banners with funny messages, and these sometimes appear on television. These days, fans also write their messages on their tablet PCs and smartphones.

These modern devices are not the only additions to baseball fandom. Not long ago, baseball stadiums were places for middle-aged guys to go out with their friends or coworkers to have fun, but these days, a lot of young couples and families attend baseball games. With this change in demographics has come a change in the gimmicks programmed during the game. These days, many stadiums have a “kiss cam,” a roving camera that captures shots of couples in an effort to get them to kiss on camera.

This and other events, such as dance contests, have transformed the baseball stadium into more than a venue for watching baseball, Lee Jin-hyung, the KBO communications director, said.

“These days, fans are not only thinking about the game results but are thinking of baseball as a recreational activity,” he said.