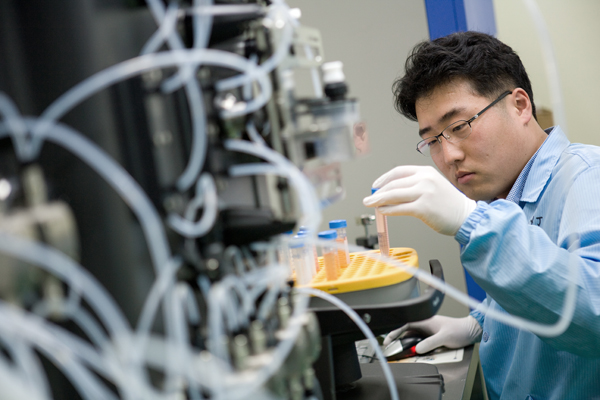 A researcher works on developing biosimilars at a research center of Hanwha Chemical in the Daedeok District of Daejeon. Provided by the company

Paul Coleman, the new Chief of Hanwha Chemical’s biobusiness unit, said the company is developing three new biosimilar products, in an interview with the JoongAng Ilbo earlier this week.

Korean conglomerates such as Hanwha Group and Samsung Group are starting to develop biosimilars, which are closely-copied versions of original biopharmaceutical products, forecasting that they will grow into a large and lucrative market about 10 years from now.

Biosimilars are 20 to 30 percent less expensive than original biopharmaceutical products, according to Hanwha Chemical. 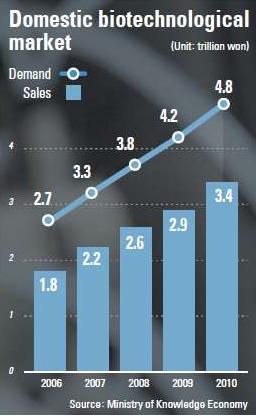 Hanwha went into the biosimilar business in 2007 and last year went into a partnership with MSD, a Korean branch of U.S. pharmaceutical company Merck to codevelop and commercialize HD203, a biosimilar form of the arthritis drug Etanercept.

Hanwha wants HD203 to be the first biosimiliar drug on the market in the world, although it faces competition in that goal from another Korean company, Celtrion.

Hanwha Group Chairman Kim Seung-youn has set a goal of 140 trillion won ($123.8 billion) in sales and 12 trillion won in operating profit by 2020 in its division that includes biopharmaceuticals and solar energy.

“Hanwha is currently developing three biosimilars that will bring huge profits to the group,” Coleman said.

Coleman stressed that research and development efforts on biosimilars should be increased because patents of major original biopharmaceutical products will expire in the next few years.

According to a report by the Samsung Economic Research Institute, the biopharmaceutical market will reach $260 billion by 2020, and biosimilars will account for $90.5 billion of the total.

Samsung Group Chairman Lee Kun-hee is also aware of the importance of the biosimilar business. In February, the group’s biopharmaceutical unit Samsung Biologics set up a biosimilar joint venture with U.S.-based Biogen Idec. The group invested 155.6 billion won in the unit in January with the aim of making it a cash cow for the group. Samsung plans to invest a total of 311.7 billion won in the venture by next year.

“Samsung’s move is interpreted as a positive signal for the biosimilar business, because an investment made by Samsung means that this business does have growth potential,” an industrial insider said.

Celtrion, a leading biosimilar developer in Korea, is going to launch two products this year, one for breast cancer and the other one for rheumatoid arthritis.

Clinical tests for the drugs have been completed.

The company said it has applied for approval for a biosimilar of the rheumatoid arthritis drug Remicade from the country’s Food and Drug Administration and the European Medicines Agency.