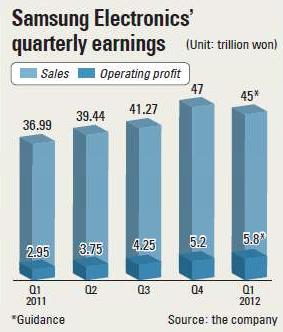 Samsung Electronics’ operating profit nearly doubled to 5.8 trillion won ($5.13 billion) in the first quarter, topping market estimates of as high as 5.5 trillion won, thanks to smartphones and the Galaxy Note.

According to the company’s preliminary estimate for the quarter ended March 31, operating profit gained 96.6 percent from the same period a year earlier, and 9.4 percent compared with the preceding quarter.

Ordinarily, companies show a pattern of weak earnings in the first quarter.

Sales at the world’s No. 1 producer of memory chips and flat-screen televisions were down by 4.9 percent from the previous three months to 45 trillion won, but on-year growth in sales was a robust 21.7 percent. 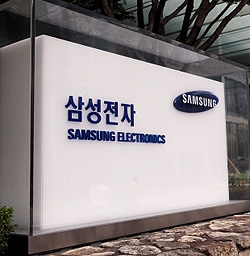 In less than a year after its release, Galaxy S2 has sold over 20 million units globally.

The 5.3-inch Galaxy Note mini tablet has emerged as another powerful weapon just five months after its debut. Its global sales have surpassed 5 million units.

Lee said that margins from Galaxy S2 sales must be much bigger than analyst estimates.

“Given the retail price of Galaxy S2 has remained unchanged over the past year, the upswing in the operating profit implies Samsung has slashed its costs more heavily than we thought,” he said.

Only four months after breaking the 1 million won mark for the first time in its history, shares of Samsung rose above 1.3 million won on March 27.

On April 4, when the Kospi closed down 1.5 percent, Samsung shares hit a record high of 1.35 million won.

Bank of America Merrill Lynch predicts Samsung shares would climb to as high as 2 million won.

“The demand for smartphones is rising when Samsung has no conspicuous competitors in the market except for Apple,” said Lee Se-chul, an analyst with Meritz.

While its competitors have few new smartphone products planned for release in the second quarter, Samsung is expected to roll out Galaxy S3, the third of the Galaxy S smartphone series, the analyst added. When Apple will release its much-anticipated iPhone 5 remains unknown, with rumors divided between June and October.

According to market researcher Strategy Analytics, Apple was the world’s largest smartphone vendor with a 37 percent share in the last quarter of last year, narrowly outpacing Samsung’s 36.5 percent.

Samsung overtook Apple in the smartphone market for the first time in the preceding three months.

Analysts predict improved earnings of its semiconductor division would also prop up Samsung’s performance through the second quarter.

According to Lee of Meritz Securities, demand for semiconductors would rise as Samsung prepares to release an updated version of its Ultrabook laptop topped with Microsoft’s new operating system Windows 8.