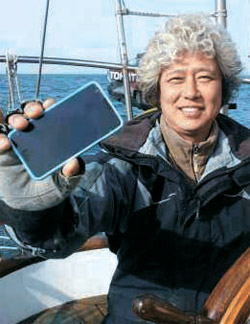 Instead of a compass or a GPS system, one middle-aged Korean sailor has announced he will sail around the world on his yacht, equipped with just a smartphone to guide him through the stormy seas.

“To show the world the power of Korean information technology, I’m challenging myself to travel around the world nonstop using only a smartphone,” said Captain Yoon Tae-geun, 50, from Changwon, capital of South Gyeongsang, on April 1 as announced his bold plans to make a single-handed, round-the-world yacht voyage without stopping at any ports along the way.

He plans to depart from the southern port city of Busan on Nov. 4. His route will take him through Drake Passage in the southeastern Pacific Ocean, around Cape Town through the Atlantic Ocean, southern Australia and Southeast Asia. His journey will end in Busan.

The course is some 46,000 kilometers (28,583 miles), and the trip will take around six months. He will captain the vessel, an 18-meter yacht from Canada, to Korea from Canada, a process which in itself will take four months.

This is not Yoon’s first global journey. He was the first Korean national to successfully travel around the world in a yacht.

But sailing around the world nonstop, without stopping at any ports to restock supplies and do repairs, will be far more difficult and dangerous.

Thus, to prepare for such a trip, the ship will have to have enough food and water to last the duration of the trip, along with any necessary repair equipment and spare components.

Because of the amount of supplies he has to carry with him, there is barely room for him to lie down.

The most difficult aspect of the journey is that he will not be equipped with perhaps the most important device for a captain of a ship - a GPS navigation system. Instead, Yoon plans to rely on his smartphone GPS to navigate his way around the world.

He will also use the device to take pictures and videos and upload them to his Web site, www.marinekorea.co.kr.

Yoon received partial funding for the trip for the yacht and smartphone.

If his trip is successful, he plans to participate in Vendee Globe, a nonstop, single person, round-the-world yacht race that started in 1989 and takes places every four years. The race has yet to see an Asian winner.