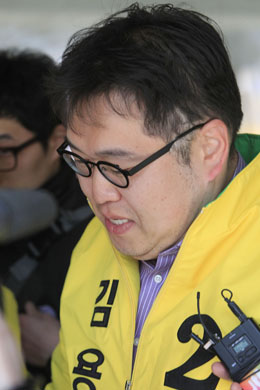 Kim Yong-min, who is under attack for raunchy, sexist and cruel jokes he made, refuses reporters’ questions yesterday at a senior citizen center in Nowon District, northern Seoul. [YONHAP]

A high-profile Democratic United Party candidate yesterday broke ranks and urged action against fellow candidate Kim Yong-min, who is under attack for raunchy, sexist and cruel jokes he made as co-host of the popular liberal podcast “Naneun Ggomsuda” (“I’m a Petty-Minded Creep”).

Chun Jung-bae, a four-time lawmaker who served as the Roh Moo-hyun government’s justice minister, said yesterday the party needs to take some action against Kim, who is running for the National Assembly from Seoul’s Nowon A District, that will satisfy the people.

“The social network services, particularly young voters on them, are seriously concerned about the problem in Nowon,” said Chun, the DUP candidate for Songpa B District, in an interview with SBS radio yesterday morning. Chun said the problem is a matter of an individual candidate, but the DUP still needs to take action that can convince the public.

The DUP leadership has made no official reaction to the widening controversy. A video clip montage of some of Kim’s outrageous jokes and remarks was posted on YouTube Sunday. He used shock jock crude language, told dirty jokes and in 2004 suggested that Korea make a terrorist strike on the U.S. by sending a convicted Korean rapist-murderer to Washington to kill then-President George W. Bush and then-Secretary of Defense Donald Rumsfeld, and to rape and kill then-National Security Adviser Condoleezza Rice.

The liberal alliance of the Democratic United Party and the Unified Progressive Party was criticized for nominating him for the National Assembly. The ruling Saenuri Party fueled the controversy by making public more of Kim’s past remarks that disparaged senior citizens and Protestants.

Kim issued an apology Thursday via a video message on his blog, but made clear that he will stay in the race and win. Nowon A District is the former constituency of Chung Bong-ju, another co-host of “Naneun Ggomsuda,” who is in jail for spreading false rumors about President Lee Myung-bak when Lee was running for president in 2007.

With many tight races in the capital region, other liberal candidates fear the controversy will weaken their support.

“It is undeniable that Kim’s vulgar remarks are badly affecting the final days of our campaigns in the hard-to-predict races of the capital region,” a DUP candidate told the JoongAng Ilbo. “The party failed to respond to the controversy because it is afraid of irritating the ‘Naggomsu’ fans.”

With an average of six million downloads per episode, the podcast has become a political force in the liberal arena.

“Kim should have stepped down in principle, but there are many people who are afraid of the backlash,” another DUP official said.

According to Park Yong-jin, a spokesman of the DUP, the party’s campaign committee had no discussions about Kim’s fate. “There is no excuse to offer, but Kim sincerely apologized and the party agreed that his past remarks and behaviors were inappropriate,” he said. “Other than that, there is nothing we can say.”

While the DUP has kept an uncomfortable silence, other liberals, including UPP Co-chairwoman Lee Jung-hee, publicly defended Kim.

But now liberal civic groups are demanding he stand down from the race. In a joint statement, three liberal women’s groups including the Korea Women’s Associations United and the Korea Sexual Violence Relief Center said Kim’s remarks constituted as an “extremely serious verbal sexual assault.”

“The DUP and Kim must show a responsible attitude,” the statement said.

Religious groups including the Korean Association of Church Communication, the Council of Presbyterian Churches in Korea and the Esther Prayer Movement joined the condemnations after the Saenuri Party yesterday disclosed Kim’s remarks against Protestants in Korea.

“Kim called Korean churches a target to be eradicated,” said Representative Lee Hye-hoon, a senior Saenuri campaign official. “He said the churches are a type of criminal group. The DUP must state its position on that.”

On Thursday, the party also dredged up another remark by Kim disparaging the elderly. According to the Saenuri Party, Kim said that the way to stop conservative senior citizens from going to City Hall to protest liberal policies was to remove the escalators and elevators from City Hall Station.

Analysts said the controversy was growing bad enough to sink the chances of DUP candidates in the capital region in next week’s election.

In the 2004 legislative elections, Chung Dong-young, chairman of the DUP’s predecessor Uri Party, enraged senior citizens by saying, “It’s okay for voters in their 60s and 70s to not vote.”