Police can’t save woman after she calls with location

Police can’t save woman after she calls with location 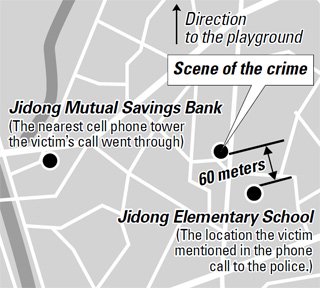 SUWON - At 10:58 p.m. on April 1, the Gyeonggi Provincial Police Agency received a call from a woman. In a frightened voice, she told the police that she had been kidnapped by a strange man. She informed the police of her whereabouts behind the locked door of the attacker’s house and desperately waited for help.

The police, however, failed to find her for the next 13 hours and could not eventually stop the woman from getting raped and brutally murdered.

When the police stormed into the house, the suspect was cutting the victim’s corpse into pieces to dispose of her body. The police failed to stop the crime even though they had specific location information secured from the victim as well as a GPS tracking device that can detect callers’ cell phone signals.

The Suwon Municipal Police Agency, who was dispatched after the Gyeonggi police got the call, said earlier this week that they caught the 42-year-old ethnic Korean man surnamed Woo at 11:50 a.m. on Monday at his house in Ji-dong, Paldal District, in Suwon for murdering a 28-year-old woman.

They explained that they failed to find her because they were not able to go into every house located near the crime scene and the GPS device is imprecise. The police said they searched all the streets within 500 meters (1,640 feet) of the house by dispatching 35 officers but failed to find the victim in time.

The public and media, however, strongly suspect that the police did a poor job of searching. They pressured the police to make public the conversation between the victim and the police. The phone record eventually confirmed that the case had been poorly handled, and now the police are being criticized for their poor performances.

The Gyeonggi Police Agency has suspended Suwon’s two chief officers who were in charge of the bungled search and dispatched a dozen inspectors to the Suwon Police Agency to look over the investigation processes.

This is part of the deposition that the police released on Thursday:

Victim: Please help me. I’m being raped by a stranger. It is the attacker’s house located between the Motgol public playground and Jidong Elementary School.

Police: You mean the school in Ji-dong in Paldal District?

Police: Let us trace your location through your mobile.

Police: Are you really saying that you’re being raped?

Victim: Yes, the attacker just went out of the house temporarily and I locked the door of a room and am making this call.

Police: Can you give us more details about the location again?

Victim: A house between the school and the playground. Please hurry please.

Police: Do you know who he is?

Police: Hello? Please give us the address one more time. Hello?

The police said the length of the communication was a minute and 50 seconds, and the caller stayed on the line for two more minutes before the call was lost. The police dispatcher is also under fire for asking the wrong questions and wasting time.

The Suwon police later found that the suspect’s house is only 60 meters (197 feet) north of the school and is on the street leading to the playground, confirming that the information delivered from the victim to the police was accurate.

“We were not able to search every single house without a warrant,” a spokesman of the Suwon police told the JoongAng Ilbo. “We also were afraid of turning on our sirens because they could agitate the suspect.”

According to the suspect, he was drunk and leaving a convenience store when he collided with the victim, who was on her way home, on the sidewalk. She didn’t apologize, so he got angry and kidnapped her.

“We sincerely apologize to the victim’s family for the officers’ poor performance,” Seo Cheon-ho, comissioner of the Gyeonggi provincial police agency said at a press conference yesterday.