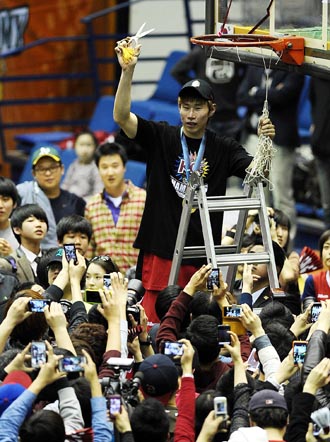 Anyang KGC forward Oh Se-keun cuts off the net after winning the KBL championship title against the Wonju Dongbu Promy at Chiak Gymnasium in Wonju, Gangwon, on Friday.[NEWSIS]

When the Anyang Korea Ginseng Corporation entered the Korean Basketball League rookie draft last year, the team only had a 25 percent chance of picking Chung-Ang University forward Oh Se-keun, the No. 1 draft pick. But the KGC, which finished ninth last season, won Oh in a lottery, and he has since exceeded expectations.

Last Friday, the KGC became the 2011-12 KBL champions after defeating regular season champion Wonju Dongbu Promy 4-2 in the best-of-seven series. It was the KGC’s first championship title in its franchise history.

With the stamina and quick feet of its young players, the underdog KGC was able to pressure the veteran Promy and come through with a surprise win. At the core of that victory was Oh, and he was credited for his work.

The 25-year-old received 54 out of 78 votes from KBL-registered reporters and was named the most valuable player of the postseason, which comes with a 10 million won prize. It was the first time in KBL history that a rookie had won the MVP title.

“I’m sorry for receiving this award as a rookie,” Oh said at the post-game press conference last Friday. “I think my veteran teammates still think of me as immature, but they have guided me well to help me get this far.”

For Oh, what likely made the award special is that he overcame his idol and Promy forward Kim Joo-sung in the finals. It signals that Oh is on his way to taking over Kim’s title of Korea’s best big man.

Kim also won the KBL championship title as a rookie. At the final series Media Day event, Kim, a two-time KBL Finals MVP, said Oh reminds him of himself as a rookie, but that Oh had a more impressive rookie year.

Oh exceeded expectations in the regular season, averaging 15.2 points, the best among Korean players, and 8.1 rebounds, the third most among local players.

Oh’s playing style was compared to that of Dallas Mavericks star Dirk Nowitzki, known for knocking out jump shots from the perimeter. The two also wear the same jersey, No. 41.

Now that Oh has achieved what other big men in Korea have not in their rookie years by winning the championship MVP, he is considered a top candidate for Rookie of the Year and possibly the season MVP, which is will be given at the KBL award ceremony today. But the rookie said this is just the beginning of his career.

“Now that I’ve been named MVP, I plan to perform like one,” Oh said. “I think I still have more to offer and I will show fans a better performance next year.”