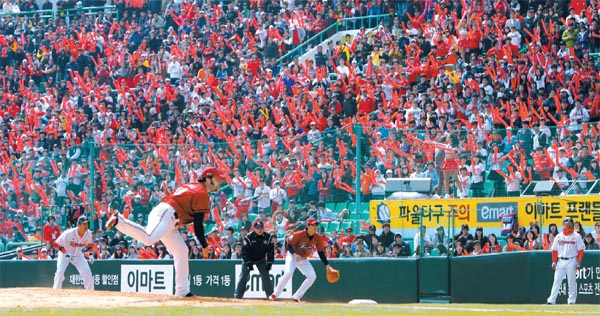 Fans at Munhak Baseball Stadium in Incheon cheer at the KBO baseball game between the SK Wyverns and the Kia Tigers yesterday as the KBO kicked off its opening weekend. The Wyverns won the game 4-1. The four games in the league’s opening weekend attracted a total of 175,119 fans, which is the fourth-largest crowd in KBO history. [YONHAP]

The Korea Baseball Organization’s new season got off to a good start with sold-out crowds on opening weekend, putting the league one step closer to achieving its goal of 7.1 million fans this season.

Playing this year under the name of Paldo Professional Baseball, the KBO is aiming to achieve attendance of 7.1 million this year, an increase of 4 percent from last year’s 6.8 million. It moved closer to that goal on opening weekend, as tickets to all four of Saturday’s opening day games sold out, bringing total attendance for the day to 92,600 fans.

In Daegu, where the defending champion Samsung Lions hosted the LG Twins, all 10,000 tickets sold out in 30 minutes after online sales started at 11 a.m. on Saturday. The quick sales helped the Lions sell out its opening game for the 13th year running.

Munhak Stadium in Incheon, where the SK Wyverns met the Kia Tigers, also sold all 27,600 of its seats on opening day.

Tickets to the game at Sajik Baseball Stadium in Busan, where the Lotte Giants squared off against the Hanwha Eagles, began selling on March 27, when 22,000 of the 28,000 available tickets sold just 27 minutes after online sales started. The remaining 6,000 tickets were sold on site on Saturday. The Giants have sold out their opening day games since 2007.

And Jamsil Stadium, where the Doosan Bears took on the Nexen Heroes, confirmed at 3 p.m. on Saturday that its 27,000 seats were sold out.

The KBO has had sold-out crowds for opening day for the last four years. Attendance at this year’s opening day games is the fourth largest; the record was set in 2009, with 96,800 fans.

Meanwhile, 82,519 fans went to the ballpark yesterday, bringing the two-day total to 175,119, the fourth largest for an opening day weekend.

In addition to hitting a home run with its attendance figures, the league’s promise of “more exciting baseball” did not disappoint.

The Giants’ Cho Sung-hwan had the season’s first home run against Eagles’ ace Ryu hyun-jin, while the Twins’ team captain Lee Byung-kyu hit a grand slam against the Lions in the third inning to become the seventh player to get one on opening day.

The Tigers’ Shin Jong-gil had the first hit of the season at Munhak Stadium, while the Wyverns’ Choi Jeong and Jeong Keun-woo marked the first RBI and runs of the season.

It was rough opening day for Eagles manager Han Dae-hwa, who was ejected from the game for disrespecting the umpire during the eighth inning. It was the first time in KBO history that a manager was ejected on opening day.

Meanwhile, SK Wyverns’ pitcher Kim Won-hyung held a retirement ceremony yesterday at Munhak Stadium. The 40-year-old made his professional debut with the Ssangbangwool Raiders, which was disbanded in 2000, after graduating from Jeonju High School in 1991. He went on to rack up 134 wins, 144 losses and 3.92 ERA in his 21 KBO seasons. He was the youngest pitcher to achieve a no-hitter in the KBO, at the age of 20 years, 9 months and 24 days.