Officials celebrate the restoration of the stream at the entrance of Changdeok Palace. Culture Minister Choe Kwang-shik (third from right), Cultural Heritage Administrator Kim Chan (second from left), and Hyundai E&C CEO Jung Soo-hyun (second from right) pose for the camera before the ribbon-cutting event. [NEWSIS]

Those who have been to Changdeok Palace more than once and have a keen eye may have realized an inconsistency between the bridge at the entrance and the bed below it. Sometimes it is flowing with water, sometimes not. 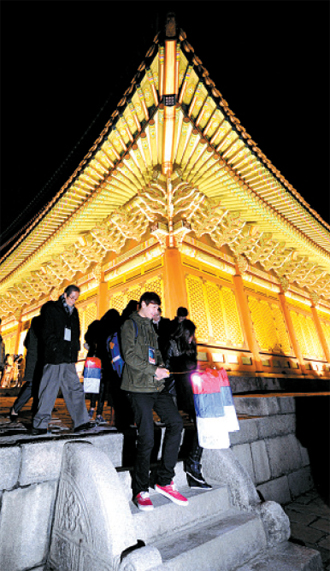 Participants on the Moonlight Tour enjoy the palace with the restored stream.

What’s the deal here? Is it supposed to be like that or what?

In fact, every Korean palace has a bridge at the entrance with a stream below. The idea was that the bridge divided the profane, outer world from the sacred palace grounds. The division was not just spiritual, but social, separating commoners from the king.

And with the stream, those entering the palace were symbolically washing away their worldly nature, thoughts and desires so that they would be fit to set foot in the palace. For that reason, the stream was called Geumcheon - which roughly translates to Stream of Abstinence, and the bridge Geumcheongyo, or Geumcheon Bridge. 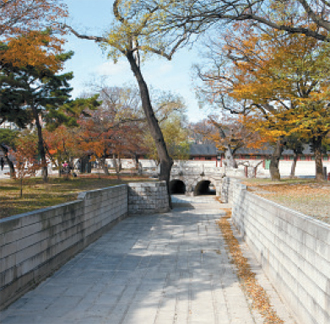 The stream, called Geumcheon (Stream of Abstinence), was placed at palace entrances to remind people to do away with their worldly desires before entering the sacred grounds.

Such bridge and stream pairings can also be found in some royal tombs and Buddhist temples and are there for the same purpose.

The good news is that the irregularity at Changdeok Palace - the crown jewel of Korean royal residences - is about to change.

Last Thursday, the Cultural Heritage Administration held a special ceremony at the palace’s Geumcheon Bridge to celebrate the recovery of the stream under the bridge.

The CHA, which operates under the Ministry of Culture, Sports and Tourism, has been working on the project with Hyundai Engineering & Construction, whose headquarters have been located next-door to the palace since last year.

“The palace is meaningless without Geumcheon. The place is alive only when the stream flows,” Choe Kwang-shik, the minister of Culture, Sports and Tourism, said at the ceremony. Before becoming the culture minister last September, Choe was the head of the CHA. The restoration of Geumcheon was a project initiated under his leadership.

For now, however, the Geumcheon will flow on a limited schedule.

It can be seen from this month until October during the palace’s Moonlight Tour, which is operated by the Cultural Heritage Administration.

The CHA has been running the tour since last year, following a trial run in 2010, in an attempt to let people see various facets of the palace.

The restoration project is also significant because of the involvement of Hyundai E&C.

The CHA frequently finds itself in public disputes with engineering and construction companies, as the CHA’s role is to preserve and restore cultural heritage sites, while the role of engineering and construction companies is to build up cities and lay down new buildings and infrastructure regardless of the ramifications on the nation’s historical record.

Hyundai E&C CEO Jung Soo-hyun was also present at the ceremony at the palace last Thursday, and said that the company will continue to help with the restoration project.

Some may question the complexity of a stream restoration, but in fact the process involves a great deal of technical work, in terms of engineering and construction, which is where Hyundai E&C comes in.

“For the past year or so, we’ve worked on developing the surface water in the upper stream, creating a roundabout way for sewage water, among other tasks,” said Jeong Gyu-cheol, a spokesperson of Changdeok Palace. “Currently the stream flows into the Cheonggye Stream and then into the Han River, but eventually we want the Geumcheon to flow in a cyclical way.”

* Changdeok Palace’s Moonlight Tour costs 30,000 won and tickets are available at Interpark (ticket.interpark.com). The tour is available only to those who purchase tickets and the number of participants is limited to 100 per tour.