Archeologist reflects on a treasure-filled life

Archeologist reflects on a treasure-filled life 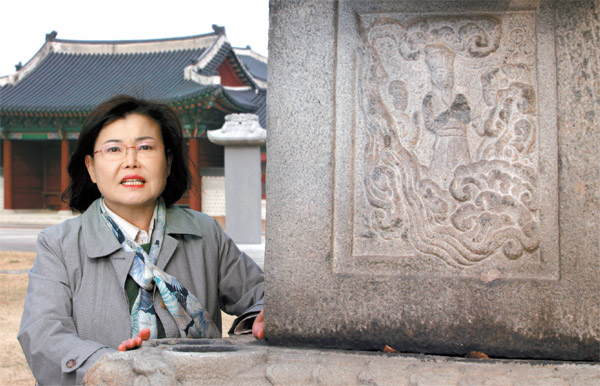 Jeong Kye-ok, a first-generation female archaeologist in Korea, poses behind an ancient stone monument next to the National Palace Museum of Korea. A former museum employee, she knows most of the relics there like the back of her hand. By Park Sang-moon


For the past 30 years or so, Jeong Kye-ok has been up close and personal with state-protected treasures that most people can only enjoy from a distance, as they are encased in glass at museums.

Often, she was the first to behold these treasures after they had spent hundreds of years buried beneath soil and rock. She cleaned them with her own hands and breathed new life into them by finding their original purposes in ancient documents.

The items she has handled include gold shoes worn by Baekjae royalty; pieces of wood on which ancient Koreans documented everything from household expenditures to state affairs; stamps used by Joseon kings; and also the clothes, shoes, accessories and cosmetics used by the royal members of the Korean Empire (1897-1910) in its final years.

In that sense, there aren’t many who have experienced ancient Korea the way Jeong has.

Jeong is a first-generation female archaeologist in Korea, according to the Korean archaeological community. She is known within its circles by sobriquets such as “Jeong of Arc,” “the Iron Lady” or “the Invincible Jeong,” apparent nods to her dogged drive to find and preserve relics.

She retired from her position at the National Research Institute of Cultural Heritage last month after a long journey: after embarking on her first excavation on her 24th birthday, she proceeded to spend the next 31 years married to Korean cultural heritage. Like marriage, the journey was full of ups and downs as well as intense feelings and heated moments.

The Korea JoongAng Daily recently sat down with Jeong at a cafe within the National Palace Museum of Korea, for which she had worked at one point in her career, to learn what it was like being part of the first generation of archaeologists in this country and hear her plans for the upcoming years.

Q. You are a first-generation female archaeologist in Korea. Why have women shunned archaeology? Also, the Korean archaeological community and the media have dubbed you “Jeong of Arc,” “the Iron Lady” and “the Invincible Jeong.” How did you get those nicknames?

A. In fact, there were female archaeologists before me, except they weren’t ones who went into the field to explore, rather they just majored in the subject and worked on administrative affairs.

The fieldwork is tough - it’s often thought to be as tough as construction work. You work with tools like shovels, hoes and brushes all day under the sun. So it’s no wonder that it wasn’t too appealing to girls.

As for the nicknames, I assume I got them mainly because of the sheer scarcity of women in archaeology. There are many women in art history, but that has not been the case with archaeology. 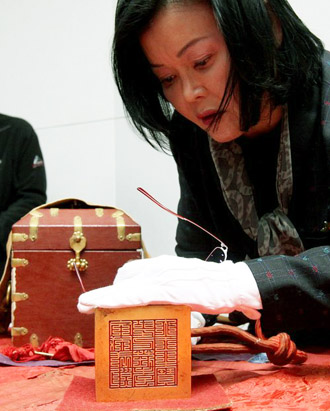 Jeong examines a royal stamp from the Joseon Dynasty. She played a leading role in finding royal stamps that had been in the possession of various collectors, as well as publishing a comprehensive book on royal stamps. She says royal stamps are the epitome of royal protocol and craftsmanship. [YONHAP]

In your retirement speech, you said “cultural properties have made me happy for the last 31 years.” What were some of the excavations that particularly thrilled and amazed you?

I still remember so vividly the moment I entered the ancient tomb in Bokam, in Naju, South Jeolla, that we worked on between 1997 and 1998. Most of the ancient tombs in Korea have already been emptied and destroyed by grave robbers when archaeologists get there, but that wasn’t the case with this tomb. So I was the first person to go into it.

Even for experienced archaeologists, entering an ancient tomb brings up intense emotions of both excitement and terror. After all, it is the house of the dead and you are not an invited guest. I was so lucky to have gotten the first glimpse of it, because it was filled with important relics.

The items we found included a pair of golden shoes, pieces of pottery and swords; they provided meaningful insight into the history of the Baekje Dynasty [18 B.C.-660], which until then had been filled with more questions than answers.

I also can’t forget the ancient tomb in Songhyeon, in Changnyeong, South Gyeongsang, that we excavated between 2003 and 2004. It can be described as [being similar to] a house in the style of Gaya [the confederacy of territorial polities in southern Korea between the first and sixth centuries], decorated with furniture and accessories from neighboring Japan and Silla [668-935].

The tomb had a stone frame - typical of the region at the time - but also a manger-like wooden coffin, which had been found only in Japan until then, and pottery of distinct Silla craftsmanship. The coffin was made from a camphor laurel and was created by cutting the trunk in half and carving out the inside.

The tomb obviously belonged to someone with power and affluence and it was a groundbreaking finding that could shed light on exchanges between the Korean Peninsula and Japan at that time.

Were there discoveries that made you particularly sad or upset? I wonder if there were moments when even an “Iron Lady” like you shed tears.

While I was in Nara, Japan, for a three-year academic program between 1998 and 2000, I heard by chance that a Japanese family was keeping a bronze bell from Goryeo [918-1392] and wanted to donate it to a government-planned museum in Fukuoka.

I sought help from my acquaintances in Japan and was able to visit the family that had the bell [a descendent of Saito]. I was saddened and heartbroken to see the bell all rusty and gathering dust in the corner of a barn. I felt so sorry for that relic and felt tears well up in my eyes.

I started trying to convince the bell’s owners [to return it to Korea]. I said: “All relics have souls and so does this one. Don’t you feel compassion for this soul that ended up so far from home? So please, let this bell return home and find peace.”

I visited them on a numerous occasions to persuade them, and was finally able to get them to agree to return it to Korea. The bell actually has a twin and it is also in Japan, where it is designated as a treasure.

Another experience I’d like to share is when I began working at the National Palace Museum of Korea.

If you think about it, about the history of the entire world, the Joseon Dynasty [1392-1910] was the only one in which a single household ruled a country for over 500 years. There must have been something special about the dynasty for it to have maintained its authority for that long.

When I came to work at the museum in 2008, the relics of the dynasty were in tragic shape. They were broken, twisted, flaky and moldy. Before the museum was built, they were stored at various places in poor condition, totally neglected: When it rained it was humid, during winter they froze, in spring they melted. So the damage was substantial.

It was such a dismal scene: When a dynasty falls, it really falls. Still, I was determined to clean, organize and introduce them to the public. 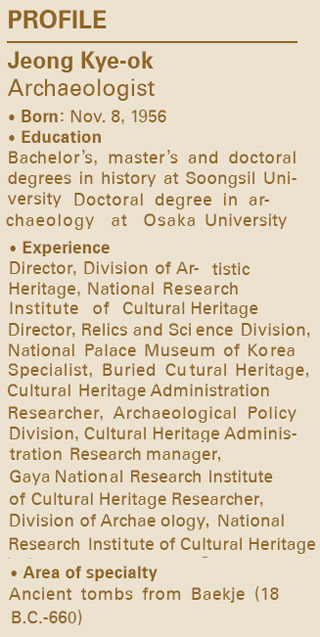 I worked on three major exhibitions. One was on the clothing and accessories of Yeongchin [1897-1970], the last crown prince of the Korean Empire, and his family. Another was on the letters of Queen Min [Empress Myeongseong, 1851-95] and another was on stamps used by Joseon kings.

What are some of the major tasks and challenges for the Korean archaeological community and the policy makers overseeing cultural properties?

Archaeology is such a romantic, intriguing field of study. I was so happy because of that all my life. But in many ways, Korean archaeology is in crisis. There are so many excavations being done, but only to facilitate development. But in fact, excavation is only one part of archaeology. There is a lack of further research following those excavations.

One of the remarks I heard from a researcher with the environmental ministry that really made me think was that it takes 30 to 50 years to recover most of the damage done to the environment.

But in the case of cultural properties - which I think are the most valuable manifestations of Korean culture - once something is gone, it’s gone forever. It takes hundreds of years for something to become a cultural property.

Compared to the advancement and current standing of Korean society and its economy, Korean people’s awareness of cultural properties is very low.

In that sense, I want to praise first lady Kim Yoon-ok for hosting a dinner at the National Museum for the wives of foreign leaders during the Nuclear Security Summit. [The event was criticized by some who were concerned for the safety of the relics.]

I want people to walk freely in palaces as if they are kings, go inside the geunjeonjeong [the main hall where the king conducted state affairs], sit there and even have mock conferences like the Joseon kings did. They should be able to get near cultural properties, be close to them or even go inside them. The kind of preservation that just locks up cultural properties is meaningless. Preservation must be accomplished in tandem with utilization.