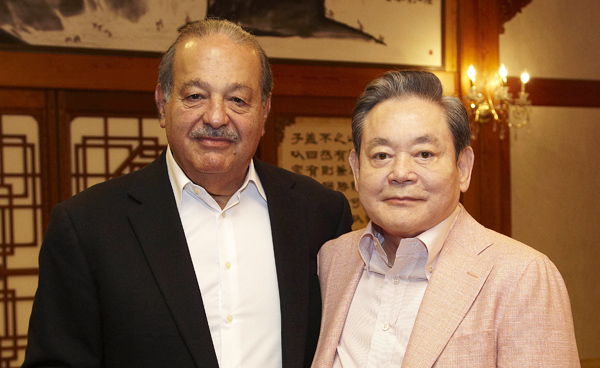 
Korea’s wealthiest magnate met the world’s richest man over the weekend at one of the country’s most exclusive residences to discuss forging closer business ties.

Chairman Lee and the Mexican business figures touched on an assortment of issues including the economy, business and sports, the group announced.

The vice chairman and president of the electronics unit held talks with Slim Helu on possible cooperation in the telecom industry, it added.

Since the continent is considered a crucial market for the fourth-generation Long Term Evolution (LTE) technology, the top officials at Samsung discussed ways to enhance collaboration with Telmex on the new network and technology while also increasing the smartphone business, the group said.

Slim Helu ranked first in this year’s list of the world’s billionaires by Forbes last month. He beat Bill Gates and Warren Buffet for the third consecutive year based on estimated net assets of $69 billion.

Slim Helu and the other Mexican businessmen visited Leeum, Samsung Museum of Art, spending the latter part of the evening appreciating ancient Korean artifacts as well as modern art from other countries, the group said.

The meeting between Lee and Helu was able to coalesce as Rana was visiting Korea to receive an honorary doctorate degree last week and Helu, a close acquaintance of his, decided to accompany him on his trip.

Rana and Lee also serve as members of the International Olympic Committee. Korea last year won on its third bid for the 2018 Winter Games.

Kepco and Kakao Mobility team up on EV charging