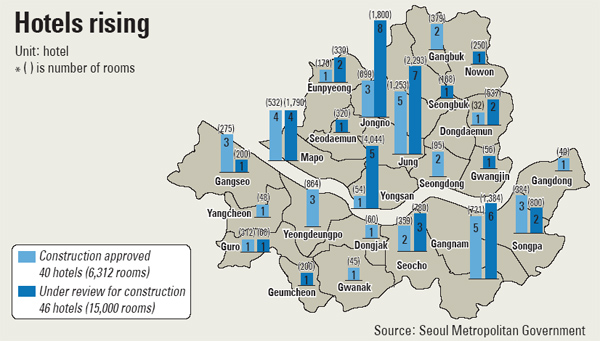 Lee Sang-hoon, general manager of the Hana Tour Agency, was quite pleased in January with a booking list filled with about 1,000 Chinese tourists visiting Seoul, thanks to the one-week-long Lunar New Year holiday season.

The pleasure, however, evaporated as soon as Lee realized that there weren’t enough hotel rooms for the Chinese tourists. He sweated over finding available rooms during the month, and barely found rooms for all of his customers after making calls all over the country.

“Some customers had to spend a few days in hotels in rural areas in North Chungcheong or North Jeolla,” Lee told the JoongAng Ilbo. “We definitely need more quality hotels in the capital city because the number of international travelers visiting Korea is increasing every year.”

Officials in hotels said that most rooms are reserved until the end of the April and many international travelers are on waiting lists.

“Most customers who have visited our hotel were businesspeople in the last few years,” Shin Joong-gyeong, manager of the Ibis Ambassador Hotel in Myeong-dong, central Seoul, told the JoongAng Ilbo. “But more and more international tourists from China, Japan and Europe are visiting our hotels. They rent more than 90 percent of our rooms now.”

However, the city is trying to catch up. In the last month, the JoongAng Ilbo evaluated hotel construction projects in the city through 25 local district offices in Seoul. According to the research, 40 hotels that have a total of 6,312 rooms are under construction or being remodeled in the city, and 46 additional hotels, which are projected to provide 15,000 rooms, are waiting for approvals for construction from the city government.

The city government predicted that most of the projected hotels will be completed by the end of 2017.

Businesses that are insufficiently competitive in their business, such as shopping malls and theaters, are being transformed into hotels. Migliore shopping mall in Myeong-dong and Cerestar shopping mall in Dongdaemun, central Seoul, are two examples. These old malls are currently being remodeled into hotels with about 300 rooms each, expected to be completed in the next two to three years. The 40-year-old Cheongchun Theater that had attracted the niche market of 1970s classic Korean movie fans in Seodaemun District, central Seoul, recently moved to Eunpyeong District. Seoul said a brand new hotel that has 300 rooms will be built in its place.

Both the city government and Korea Tourism Organization predicted that the city will have 11 million international tourists in 2012. The city needs 43,300 rooms to accommodate that number of tourists. Right now, there are 28,900 hotel-quality rooms in Seoul. The city government said they are trying to curtail the approval process that verifies hotel construction projects in order to secure the necessary number of hotel rooms.

The city government will implement a new law to support the expansion of hotels in Seoul from July.

“We definitely need more quality rooms, not love motels, that cost within 100,000 won ($89) a night to attract more tourists,” said Kim Hyung-jin, the vice chairman of Comfortel, a hotel and resort management enterprise.