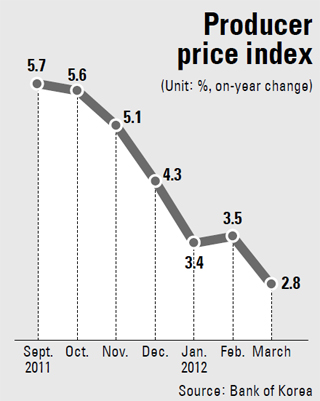 Producer price growth (PPI) decelerated to a two-year low in March from one year earlier mainly due to slower price gains in global crude prices, the central bank said yesterday.

PPI, a barometer of future consumer inflation, gained 2.8 percent, slipping from 3.5 percent on-year growth in the previous month, according to the Bank of Korea. The on-year gain is the lowest since 2.6 percent growth reported for March 2010.

Producer prices also dipped 0.6 percent from the previous month, compared with an on-month increase of 0.7 percent in February.

The slower gain last month was largely attributed to the growth decrease in crude prices and public utility fees. The price of Dubai crude averaged $122.5 in March, up 5.4 percent from the previous month.

“A slowdown in producer prices is expected to exert a positive influence on domestic consumer prices,” the BOK said.

Prices for manufactured goods such as refined petroleum and chemical products gained 0.7 percent on-month, while utility fees and transportation costs edged up 0.4 percent and 0.2 percent. Farm and fisheries product prices moved up 1.4 percent.

Prices for farm and fisheries products contracted 3.1 percent from March 2011.

The central bank said there have been few benefits felt from the free trade agreement with the United States that went into effect in mid-March.

Apart from the slower pace of growth for crude prices, the move to lower individual consumption tax on cars with engine capacity of 2-liters and higher helped limit price gains.

The BOK said the impact of the FTA with the United States should be felt in April and May. Yonhap