All things Danish coming to Korea for expo

All things Danish coming to Korea for expo 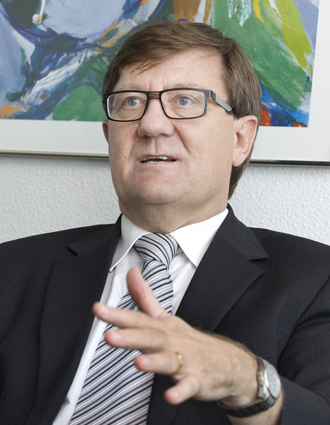 Exactly a month from now, there will be a lot of talk about Denmark in Korea when the Danish crown prince and his wife pay their first joint visit to Korea.

“They are a very nice couple and represent Denmark very well,” said Peter Hansen, Danish ambassador to Korea, in an interview with the Korea JoongAng Daily. “They are very open, so I’m certain that Koreans will like them. There’s no doubt about that.”

The couple will be in the country from May 10 to 15 to help promote the bilateral green growth alliance that has been built since last year when Korean President Lee Myung-bak visited Denmark on a state visit. When Lee was there, the two countries agreed to establish the Korea-Denmark green growth alliance, and the first meeting was held in Denmark. During the royal couple’s visit, the alliance will have its second meeting. The couple will also participate in a number of business and cultural events such as a film festival showcasing Danish films.

“I hope the couple’s visit will allow Koreans to get to know Denmark much better, because some Koreans still consider Denmark as an agricultural country, although we’re very much an industrialized one,” Hansen said.

The crown prince has been to Korea several times, and his most recent trip was only three weeks ago. He’s a member of the International Olympic Committee and was here as a member of the special committee for the Pyeongchang Winter Olympics. It is the first trip to Korea for the crown princess. The Denmark Embassy has organized an event on Facebook for Koreans to win tickets to two of the events the couple will attend: the film festival and an exhibition showcasing Danish designer Peter Jensen’s fashion designs, both on May 13.

Coinciding with the royal couple’s visit, a Danish business delegation including 77 companies and around 150 businesspeople will come to Korea. They will be accompanied by the country’s ministers of development cooperation, business affairs and growth, trade investment and science, innovation and higher education.

“It’s going to be quite a big event,” the ambassador said. “We will organize business seminars in different areas like green technology, life science, defense, design and architecture.”

There will also be pop-up shops at the Shinsegae Department Store in Jung District in central Seoul, where Danish companies will sell products like jewelry and furniture.

“It is a lot of companies, I must say,” Hansen said. “It has exceeded my expectations but I’m very happy about that because that shows Danish companies are looking to Korea for doing business.”

According to Hansen, Danish companies are realizing they need to go out to growth markets like Korea, Brazil and China because “this is the future.”

The Danish week in May follows a recent visit by Danish Prime Minister Helle Thorning-Schmidt for the two-day Nuclear Security Summit. It was the first time she came to Northeast Asia.

Hansen noted there are many similarities between the two countries. For example, the population composition of Korea is anticipated to change, with an aging society and low birthrate. Its demand for social services is also increasing, and these changes are what Denmark is facing or has faced for a number of years.

“There is a lot of possibility in exchanges in our partnership,” he said.

When asked about what differentiates the Korea-Denmark relationship from other European countries, Hansen pointed to what President Lee had said last year.

“Your president gave a very good explanation because when we started this [green growth alliance], he said Denmark was a first mover on green growth or energy,” he said. “Korea is a fast mover, and together we can be smart movers.”

He said the partnership will ensure governments and businesses are talking and trying to prevent obstacles to green growth.

“I don’t think any other countries are working so closely together in one specific area on so many different levels,” he said.