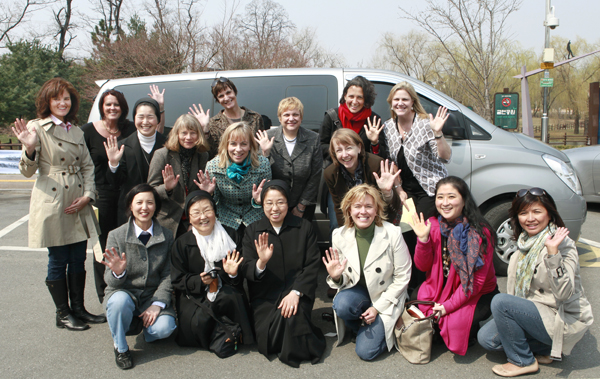 
Expat women affiliated with five organizations in Korea have come together to raise money for a minivan they donated to a regional multicultural center as part of their efforts to become involved in Korean society and help underprivileged people. It’s the first time the groups have worked together to raise money.

“What’s really great about this donation is that it’s a very expensive minivan for the multicultural center and will be used to pick up people living remotely,” Terri Hartman, the president of the Seoul International Women’s Association, said. “What makes it really special is that many women are putting their money together to help people in need, to partner together to do something good.

“It’s a good investment to help women who need job training and language skills to thrive in Korea.”

Cho Sung-ok, the chairwoman of the multicultural center, which is located in Gangjin County, South Jeolla, said the van will be used to offer door-to-door services for marriage migrant women who aren’t yet familiar with Korean culture.

“We opened the center last year, but didn’t have a van to provide door-to-door services such as medical care or language programs,” Cho said.

The members of the organizations are mostly wives of foreign government officials - such as ambassadors - and businessmen who are currently working in Korea.

Sister Oh Kwang-shim, the director of development at Planting Love, a charity formed by nuns, was the person who connected the organizations to the center in Gangjin County. She said that expat women’s groups have been offering help to the underprivileged for more than 20 years.

“We have held annual international fundraising events for people with disabilities for 21 years, and the five organizations have always helped us,” Oh said. “When we founded a shelter for pregnant girls, a school for the blind in Chungju and a day care center for people with disabilities in Gwangju, they came to us and volunteered, providing homemade baked goods and other things.

“They basically want to dedicate themselves to Korea, get to know Korean society and mingle with the people,” Oh said. “Now we are connecting them with local women who are running charities or shelters and need volunteers or help.”

“We are very glad to have a chance to do something for Korea,” Helen Bridgman, the president of the British Association of Seoul, said. “As foreigners, it’s very rewarding to do something in Korea. We have learned a lot from Korea, and I was very impressed with the dedication of Korean people who work for charities.”

In 2011, the four organizations formed a welfare committee in order to help Korean people in need.

“We’re thinking of holding a regular meeting to exchange our ideas about welfare,” she said. “We are also thinking about other projects that we can do together.”