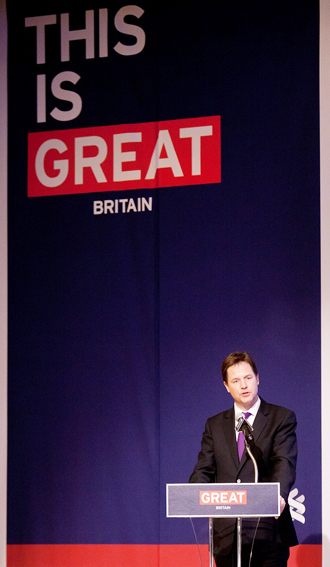 United Kingdom Deputy Prime Minister Nick Clegg launched the British government’s “Great” campaign in Seoul recently to showcase the U.K.’s strengths and capabilities ahead of the Queen’s Diamond Jubilee in June and the London Olympic Games that commence in July. The campaign was launched last fall to promote the U.K. abroad.

At a launch reception marking its arrival in Korea on March 27, Clegg said, “I’ve been fortunate enough to see many of the ways the U.K.’s strengths and creative excellence are working in partnership with companies here in Korea. I hope that this occasion will serve to further strengthen the long and close relationship between the U.K. and Korea.”

The launch was sponsored and hosted by Standard Chartered in Jongno District, central Seoul, and was organized by the British Embassy. Some 150 guests attended, including former Korean Prime Minister Han Seung-soo, who now serves as an independent director at Standard Chartered.

“We have rehearsed, rehearsed and rehearsed all the different possibilities that might arise during the [Olympic] Games. My view is the games will be as safe as they can be, and we will be as prepared as we possibly could be,” said Clegg, regarding security at the upcoming Summer Games.

Clegg visited Korea to attend the Nuclear Security Summit that took place in the capital on March 26-27.

He also met five students who had defected from North Korea. Clegg said he was moved by the fact that, while each of the students harbored different aspirations, such as becoming a lawyer or a politician, they also shared the common dream of helping their fellow North Koreans.

“We of course want to help South Korea develop the capacity to welcome and integrate North Korean defectors into South Korea. I realize it’s a big challenge, but we owe it to people who want to seek freedom to help them,” Clegg told a JoongAng Ilbo reporter after his visit. “China has an immense influence over North Korea, and in this matter, like so many other matters, I hope China will play a moderating role, which will encourage a process of economic and political change in North Korea itself.”

British Ambassador Scott Wightman said at the reception that “through the ‘Great’ campaign, we will showcase the U.K.’s strengths and expertise to the Korean public, businesses and media. Whether it’s our skill in high-tech engineering or focus on sustainable development, our world-class educational institutes or cutting-edge creativity and innovation, the campaign lets us show the true face of modern Britain.”